Mastriano and Dixon Have Lake's Complete And Total Endorsement

“Like us here in Arizona, you guys know what it’s like to have a coward seeking election that refuses to debate,” Lake said in her Mastriano endorsement appearing to note similarity between her Democratic opponent Katie Hobbs and Democratic Pennsylvanian challenger Josh Shapiro who have refused to debate their Republican opponents.

“I ask you to vote for Doug Mastriano,” Lake continued noting other Republican governors seeking reelection. “America is in desperate need of strong governors like Ron DeSantis and Kristi Noem. And I know that with America first governors like myself and Doug Mastriano added to the list we can strengthen our states and pull back power from the federal government.”

“He has my complete and total endorsement,” Lake concluded.

“I am honored to receive this endorsement from Kari Lake,” said Mastriano in response to Lake’s endorsement before reciprocating the endorsement. “Kari is a true conservative patriot and will make an excellent governor of Arizona.”

“Her support means a lot to our campaign and our entire grassroots movement,” Mastriano’s statement continued. “Republicans must stand together against the radical Democrat Party and do everything in our power to defeat them this November to bring peace back to our streets and prosperity to the Commonwealth. The future of our entire country depends on it.”

Hobbs has refused to debate Lake, claiming she has “no desire of the spectacle that [Lake is] looking to create.” Shapiro reportedly would not agree to debate Mastriano citing no agreement with the Republican candidate on debate terms, WFMZ-TV reported.

Lake similarly introduced herself in Dixon’s endorsement video before declaring current Democratic Michigan governor Gretchen Whitmer “has done more to harm her citizens and children in that state than just about any governor in American history.”

“I encourage you to vote for the true outsider and patriot. … Tudor will be an incredible leader for Michigan,” Lake concluded. “She has my complete and total endorsement.”

“I’m honored to have the endorsement of [Kari Lake]!” Dixon said in response to Lake’s endorsement. “Kari knows this election is vital to getting our state back on track. Thank you, Kari!”

I'm honored to have the endorsement of @KariLake!

Kari knows this election is vital to getting our state back on track.

“There is no one in Pennsylvania who has done more, or fought harder, for Election Integrity than State Senator Doug Mastriano,” Trump said of Mastriano during the Pennsylvania Gubernatorial primary in May. “[Mastriano is] a fighter like few others, and has been with me right from the beginning, and now I have an obligation to be with him.”

“Tudor Dixon is a Conservative Warrior who built an impressive career in the steel industry while working with her fabulous father, who is now watching her proudly from above,” said Trump in late July, the Detroit Free Press reported. “She raised a beautiful family, and is ready to save Michigan. She’s pro-God, pro-Gun, and pro-Freedom, and she won’t be stopped! She will stand up to the Radical Left as they try to indoctrinate our children and is ready to take on one of the worst Governors in the nation.”

“Few can take on the Fake News Media like Kari,” said Trump in his late September endorsement. “She is strong on Crime, will protect our Border, Second Amendment, Military, and Vets, and will fight to restore Election Integrity (both past and future!” 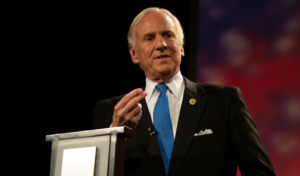 South Carolina Governor Says 'Marriage Should Be Between Man and Woman'