Vice President Kamala Harris will travel to Honduras next week to attend the Inauguration of incoming President Xiomara Castro. The two leaders will discuss a series of issues including “corruption” and the “root causes of migration.”

“The vice president’s visit will further the commitment she and President-elect Castro made … to deepen the partnership between the United States and Honduras and work together to advance economic growth, combat corruption, and address the root causes of migration,” Harris’ deputy press secretary, Sabrina Singh, wrote in a statement.

“Until speaking with Castro on Dec. 10 in a phone call, Harris had not had direct contact with any Honduran leaders, despite leading American efforts to curb migration from the region. The number of people stopped at the U.S.-Mexico border last year reached record levels, with many migrants beginning their journeys in Central America,” reports the Los Angeles Times.

The Vice President was handpicked by Joe Biden two months after taking office to tackle the immigration crisis occurring along the US-Mexico border.

The President rescinded Donald Trump’s ‘Remain in Mexico’ asylum policy just days after his Inauguration. The decision resulted in a massive influx of refugees from Central America, Haiti, and West Africa.

Read the full report at the Los Angeles Times. 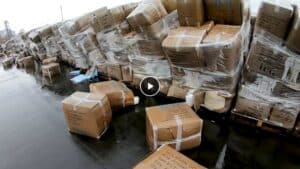 WATCH: Millions Worth of PPE Rotting in California