A judge has ruled that New York City cannot permit noncitizens to vote in local elections despite legislation passed by the city council.

The New York City council passed legislation in December of 2021 that would allow people who are not legally citizens of the United States to vote in city-wide elections after 30-days of residency. More than 800,000 noncitizens would have been able to participate in the 2022 municipal elections, including casting a vote for the city’s mayor, borough presidents and city council members.

The “Our City, Our Vote” bill’s sponsor, Councilman Ydanis Rodriguez, argued the bill ensured the city met the legal standard of “no taxation without representation.”

“The constitution of New York State and the New York City Charter is a live document that provides the opportunity for us to always look to make it better,” Rodriguez told CNN on Dec. 9. “I think that today we were able to make that important change that recognizes the contributions of immigrants.”

The bill became law in January, despite not being signed by Mayor Eric Adams. The law did not allow noncitizens to vote in federal or state elections.

Republican officials and the New York Republican Party objected to the bill, which they believe directly violates the state constitution. The group of lawmakers filed a lawsuit in Staten Island Supreme Court seeking to block the law.

Additionally, the massive increase in the number of New York voters was believed to be too much for the city to handle without administrative issues and inaccuracies.

“Despite a generous budget of more than $246 million in 2020, $130 million in 2021 and over 500 full-time staffers, the New York City Board of Elections has repeatedly failed to provide voters with a seamless voting experience,” wrote the Manhattan Institute.

The free-market organization said the board would “face significant challenges” while trying to enfranchise a group larger than “the entire population of Seattle.” The Manhattan Institute noted that there would need to be a special “local-only” ballot and adequate training for poll workers which would strain an already overburdened board and increase the risk of election errors.

“There is no statutory ability for the City of New York to issue inconsistent laws permitting noncitizens to vote and exceed the authority granted to it by the New York State Constitution,” Porzio wrote in his ruling, per AP News. “The New York State Constitution expressly states that citizens meeting the age and residency requirements are entitled to register and vote in elections.”

“Though voting is a right so many citizens take for granted, the City of New York cannot ‘obviate’ the restrictions imposed by the Constitution,” the judge added.

Borelli was one of the plaintiffs in the lawsuit challenging the law.

“Today’s decision validates those of us who can read the plain English words of our state constitution and state statutes: Noncitizen voting in New York is illegal, and shame on those who thought they could skirt the law for political gain,” Borelli said in a statement to CBS News following the judge’s ruling. “Opposition to this measure was bipartisan and cut across countless neighborhood and ethnic lines, yet progressives chose to ignore both our constitution and public sentiment in order to suit their aims.”

The city council has not yet said if they will appeal Porzio’s ruling. 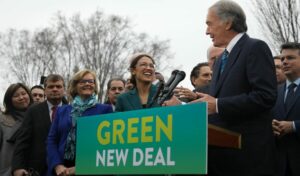