An Atlanta judge rejected an appeal by a group of Georgia voters who are seeking to prevent Congresswoman Marjorie Taylor Greene from appearing on the ballot.

Greene is currently seeking reelection in the 14th Congressional District. She easily outperformed her primary challengers on May 23 – earning over 50% more of the votes than the second place finisher, Gary Black.

Prior to the May primary, five constituents in her district filed a lawsuit challenging her eligibility on constitutional grounds. The group argued that Greene’s candidacy violated the 14th amendment, which bars anyone who has participated in an insurrection from holding government office. The voters argued that the congresswoman encouraged protestors to invade the Capital on Jan. 6, 2021 in order to disrupt the certification of the 2020 presidential elections.

Greene testified during a trial on April 22 where the plaintiff’s attorney, Ron Fein, asked her about supposed coded language used by supporters of President Donald Trump on Twitter and suggested the congresswoman encouraged violence among those who attended a rally in support of Trump in Washington, DC.

“You sound like you have as many conspiracy theories as QAnon,” Greene told Fein during one exchange. She denied his allegations and said her examination into the validity of the 2020 election was within her legal rights as a member of Congress.

State Administrative Law Judge Charles Beaudrot ruled on May 6 that Greene was not in violation of the 14th amendment and could appear on the ballot. Secretary of State Brad Raffensperger subsequently adopted the decision, saying that electing Greene was “rightfully a question for the voters of Georgia’s 14th Congressional District.”

The voters challenging her candidacy, who have been represented by Free Speech for People, filed an appeal and asked the court to block Greene from the ballot.

Chief Judge Christopher Brasher announced on July 25 that he had rejected the appeal and, instead, supported Raffensprerger’s decision to permit the congresswoman on the ballot.

In his decision, the judge said the plaintiffs had not sufficiently demonstrated that Greene’s actions before, during and after the security breach at the capital encouraged or supported those involved.

Free Speech for People has said Brasher released his opinion “with minimal legal analysis” and is weighing appealing to the Georgia Supreme Court, per The Sacramento Bee. 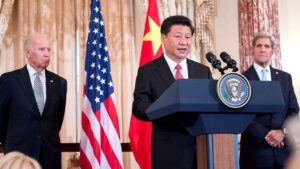