On Thursday, Biden finally condemned Communism amid the mass protests in Cuba.

The protests have been going on since Sunday over food shortages and power outages.

White House Press Secretary Jen Psaki also condemned Communism earlier in the day, after dancing around the subject for nearly a week.

“Communism is a failed ideology, and we certainly believe that it has failed the people of Cuba,” Psaki said at her press briefing. “They deserve freedom.”

JUST IN – Psaki: "Communism is a failed ideology, and we certainly believe that it has failed the people of Cuba. They deserve freedom."pic.twitter.com/MK0dda9NCe

Psaki had been under fire after originally refusing to condemn the communist regime, instead just blaming “government mismanagement.”

When pressed on the issue, Psaki claimed that Biden was doing plenty to condemn the Cuban government.

“He has made clear that he stands with the Cuban people and their call for freedom from both the pandemic and from decades of repression and economic suffering to which they’ve been subjected by Cuba’s authoritarian regime,” Psaki said.

On Wednesday, Florida Governor Ron DeSantis, one of the favorites for the 2024 GOP presidential nomination, sent a letter to Biden requesting aid and internet service for the people of Cuba.

Democratic Socialist Bernie Sanders was quick to support the protesters, but was careful not to condemn the Communism that they are protesting.

“All people have the right to protest and to live in a democratic society. I call on the Cuban government to respect opposition rights and refrain from violence. It’s also long past time to end the unilateral U.S. embargo on Cuba, which has only hurt, not helped, the Cuban people,” Sanders tweeted. 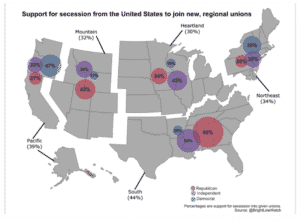