The first lady tweeted her admiration for the El Centro Academy in Kansas after her visit last week, following encouragement from Representative Sharice Davids.

Those were the words I wrote down during an inspiring charla today with @SBAIsabel, @RepDavids, and members of the Latino community in Kansas City, KS.

Thank you El Centro Academy for Children for all you do and for being our gracious hosts today. pic.twitter.com/a0IPmqRfhu

The school is run by Irene Caudillo, an educator who donated to President Joe Biden’s campaign. The academy’s nonprofit branch published a series of videos on how illegal immigrants can avoid arrests. The Washington Free Beacon reported the videos included tips like ignoring ICE agents during any interactions and contacting “a member of the community who does have status.”

Caudillo told the Beacon that she and the first lady did not discuss immigration during her visit. Rather, she wanted to show Biden El Centro’s early childhood programs because education is one of her key interests.

The outlet noted that “Biden’s visit comes as her husband’s administration scrambles to deal with an unprecedented border crisis. The number of illegal crossings at the southern border is at a multi-decade high, with law enforcement expected to report nearly two million migrant encounters in fiscal year 2021.”

A significant amount of El Centro funding comes from UnidosUS, which is a pro-immigration group that has promoted Critical Race Theory instruction in K-12 schools, referring to CRT as “a truthful retelling of our nation’s history.”

Janet Murguía, the president of UnidosUS, attended the ‘charla’ event, “which focused on small business owners and strengthening the economy,” said KSHB. “She said Biden’s visit signals that the Latino community is important to the Biden administration.”

“President Biden is currently dealing with a border crisis that has been raging for months. At least 160,000 illegal immigrants have been released into the country since March, many times with little or no supervision,” reports Fox News.

Jill Biden’s visit to the school was scheduled as a part of a trip commemorating Hispanic Heritage Month. 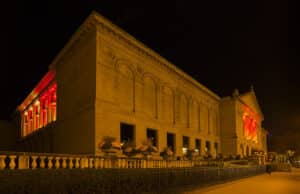