Meadows appeared to be willing to cooperate with the inquiry at first but ceased cooperation after they subpoenaed Verizon for his phone records.

As Timcast previously reported, Committee Chairman Bernie Thompson had sent a letter to Meadows on December 8, warning that they would be referring him for criminal prosecution.

“In summary, on November 12, 2021, Mr. Meadows failed to appear for the deposition required by the Select Committee’s subpoena. On November 22, 2021, the Select Committee gave Mr. Meadows an opportunity to cure his non-compliance by appearing for a deposition, which was ultimately scheduled for December 8, 2021. Now, the day before the deposition, Mr. Meadows has rejected the opportunity to cure his non-compliance and made it clear that he does not intend to participate in a deposition,” Thompson wrote.

Before Meadows’ decision not to comply, he had turned over approximately 6,000 pages worth of documents, including information from his email account and cell phone. Some of the text messages he provided showed that Sean Hannity, Brian Kilmeade, Laura Ingraham, and Donald Trump Jr. had all urged Meadows to get the then-president to intervene and stop the protest.

“He’s got to condemn this sh-t ASAP,” Donald Trump Jr. texted during the incident, to which Meadows agreed.

Trump’s son added, “We need an Oval Office address. He has to lead now. It has gone too far and gotten out of hand,” in a later text.

The resolution will now be moving to the full House for a vote on Tuesday. It is expected to pass mainly along party lines, according to a report from The Hill.

“It comes down to this: Mr. Meadows started by doing the right thing: cooperating. He handed over records that he didn’t try to shield behind some excuse. But in an investigation like ours, that’s just the first step. When the records raise questions, like these most certainly do, you have to come in and answer those questions,” said Rep. Bennie Thompson, chairman of the select committee, said according to The Hill’s report. “He changed his mind and told us to pound sand. He didn’t even show up.”

Speaking to Real America’s Voice, Meadows said that “we found that in spite of our cooperation in sharing documents with them, they had issued, unbeknownst to us and without even a courtesy call, issued a subpoena to a third-party carrier trying to get information. At this point, we feel like it’s best that we just continue to honor the executive privilege and it looks like the courts are going to have to weigh in on this.”

In October, Steve Bannon was also held in contempt for refusing to cooperate with the committee. 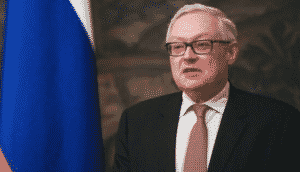 Russia Discusses Possible Use of Nuclear Missiles Amid Tension With NATO