He called the pro-transitioning activist a 'child sexualization specialist'

Cultural critic and commentator James Lindsay has been permanently banned from Twitter following comments he made to a transgender attorney who boasted about reporting his tweets.

Lindsay first achieved public notoriety after he decided to test whether academic journals were fully and critically reviewing submissions to their publications. After submitting twenty prank articles to various publications, he found that he was able to get published in allegedly rigorously screened journals while writing complete fiction. Since then, Lindsay has evolved into something of a cultural weathervane for a number of conservatives who credit him with introducing them to topics like critical theory and giving them insight into how and what is shaping American culture.

Alejandra Caraballo, a transgender attorney who describes herself as a “Wise Latina” in her Twitter bio, took credit for the permanent suspension of Lindsay earlier today. The verified Twitter user, who is also a clinical instructor at Harvard Law School’s Cyberlaw Clinic, boasted from her timeline about her involvement in reporting his Tweets. “Tell James, I want him to know it was me,” she Tweeted alongside a screenshot of her reporting history.

The argument began with Caraballo, who frequently trolled Lindsay, calling the cultural critic a misogynoir (a racist who is informed by sexism and is particularly prejudiced against black women). In response, Lindsay referred to Alejandra Caraballo, who previously worked as a staff attorney for the Transgender Legal Defense and Education Fund, as a “child sexualization specialist.”

Our friend @ConceptualJames was suspended from Twitter for the following exchange with a trans activist. Referring to someone that is actively working to push children into an identity crisis as a “child sexualization specialist” is deemed “hateful conduct” by twitter now. pic.twitter.com/cgw7Bxwe3h

Lindsay had previously been issued a temporary suspension — again for hateful conduct — after he called Ari Drennen, a Media Matters LGBT activist, a “groomer.” When Drennen noticed that he had been permanently banned today, she celebrated.

Lindsay told Timcast via email he has already filed an appeal.

In response to the platform’s request to “describe the problem you’re having,” Lindsay wrote: “The problem is that you arbitrarily changed the rules and suspended my account after repeatedly forcing me to lie to admissions of guilt for ‘violations’ that aren’t real. You should un-suspend my account and correct your biased and arbitrary policy enforcement.”

Tell James, I want him to know it was me. pic.twitter.com/fn49LqjTdK

Where to find James Lindsay now:

Hello all. James Lindsay (@ConceptualJames) has been permanently suspended on Twitter. While he's considering his options, follow him elsewhere: https://t.co/Y88qox5k70

A number of Twitter commentators were critical of Twitter’s decision:

James Lindsay called out groomers normalizing the sexualization of children and this chick responded by spam reporting his account until Twitter suspended it.

That says a lot about you. https://t.co/FjspRzr3YJ

This is a perfect example of discourse engineering: using the tools of language control to shape and restrict public narratives. "Hateful conduct" is a pretext—"hate" is, in fact, widely permitted, as long as it's directed toward regime-approved targets.https://t.co/0KA6rm51jM 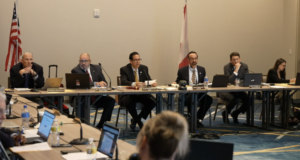 Florida Board of Medicine Discusses Ban on Hormone Therapy, Surgery for Minors