'Dude, You've Been In The Senate For Two Years ... This Is A Huge Crisis'

“They asked a water question in the debate and I thought, ‘Uh-oh Mark Kelly might actually be good at this one,'” the Republican candidate said. “He totally flubbed it. It’s like dude, you’ve been in the Senate for two years, we’re in a drought, we live in a desert, we’re growing. This is a huge crisis.”

[Kelly] actually went on TV recently and said, “Our water problem is not an existential crisis.” I’m sorry, what? It is absolutely an existential crisis. We need to solve it; otherwise, there’s no future in Arizona. I want my three boys … to choose to live in Arizona in 30 years when they’re my age. But you can’t do it if you go the faucet and turn it on and no water comes out. We need to solve this crisis.

Masters explained Arizona’s water allocation had been cut by the Federal Government by 592,000 acre feet, noting California had not seen a reduction in water allocation.

“I am tired of Mark Kelly being the third Senator from California,” Masters said, echoing his Thursday debate response. The Senate candidate called for water rights agreements to be reformed, citing the 1922 Colorado River Compact wherein the United States Supreme Court ruled that California was entitled to larger water allocation.

In late August, Kelly was questioned about Arizona’s unprecedented drought during a segment on CNN’s State of the Union hosted by Jake Tapper.

“Well, first — first of all, it’s not existential,” the Arizona Senator asserted.

We have got solutions. I was able to add $8 billion into the bipartisan infrastructure bill for more water storage and resiliency and settling tribal water claims, more recently, in the Inflation Reduction Act, $4 billion to deal with this drought. So we do have the tools in place. What we don’t have is the partnership right now with other states. Arizona has made an offer to put more and leave more water up in Lake Mead by far than any other state. So we need the other Upper and Lower Basin states to step up and do their part.

“This is the worst drought this part of the planet has seen in a thousand years. It’s been going on twenty-two years. Lake Powell and Lake Mead are at crisis-low levels,” said Kelly on Thursday appearing to contradict his previous statement. 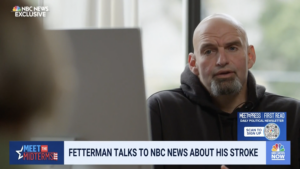