On Wednesday, Israel authorized measures to improve relations with Palestinians.

According to The Associated Press, Gantz decided to approve multiple measures after meeting with Abbas on Tuesday night at his private residence.

The meeting was Abbas’s first official meeting with Israeli leadership since 2010.

The pair reportedly discussed security coordination between Israel and Palestine during the meeting.

Gantz approved “confidence-building measures” such as the authorization of permits for Palestinian merchants and VIPs, the transfer of tax payments to the Palestinian Authority, and the residency status for thousands of Palestinians in the West Bank and Gaza Strip, AP reported.

Recent months have seen a surge in violence by Israeli settlers against Palestinians in the West Bank, along with Palestinian attacks on Israelis in east Jerusalem and the West Bank.

However, according to The Jerusalem Post, Bennett’s government has said that it wants to reduce tensions between Israel and Palestine by improving West Bank living conditions.

Palestine seeks an independent state which would include all of the West Bank, East Jerusalem and the Gaza Strip. These are areas Israel captured in the 1967 Mideast War, known as the Six-Day War. 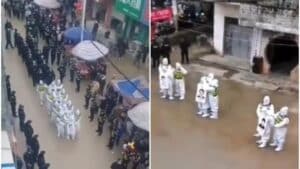