On Tuesday, a troop of armed riot police paraded four alleged violators of COVID rules through the streets of south China, a practice banned in 2010.

The event has resulted in criticism of the Chinese government’s heavy-handed approach.

The four alleged violators were masked and dawning hazmat suits as they were paraded Tuesday in front of crowded streets in Guangxi region’s Jingxi city. As they walked the route, the four suspects were carrying large placards with their faces and names.

Photos and video surfaced of the event showing each of the suspects being held by two officers and surrounded by a circle of police in riot gear. Many of the officers were also armed.

In August, the local government announced the newly revived disciplinary measures to penalize anyone who violates the COVID health regulations.

In 2010 China outlawed public shaming of criminal suspects due to campaigning by human rights activists. However, the practice has recently resurfaced as local governments struggle to enforce China’s zero-COVID policy.

Tuesday’s event comes amid concerns by residents who fear they may starve in the heavily locked-down region. Residents have been banned from leaving their homes — even to buy food.

Just a few dozen cases sparked the heavy COVID measures in the region.

On Monday, officials in the city of Xi’an notified the 13 million residents they could only leave their homes when invited to take part in a new round of mass testing.

The four alleged violators in the parade Tuesday have also been accused of transporting illegal migrants. The Jingxi region sits near the Chinese border with Vietnam. Illegal immigration has been a great concern to China, as their borders remain mostly closed as a preventative measure against the virus.

While Jingxi is under pressure from the CCP to prevent imported coronavirus cases, “the measure seriously violates the spirit of the rule of law and cannot be allowed to happen again,” Chinese Communist Party-affiliated Beijing News said Wednesday. 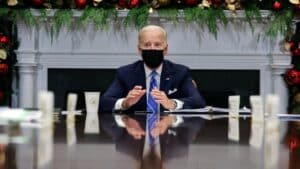 Should Biden Be Held to the Same Standard He Used to Criticize Trump on COVID-19?