Iowa Reporter Comes Out as Transgender During Newscast (VIDEO)

An Iowa reporter came out as transgender during a local newscast on Tuesday.

Nora J.S. Reichardt, 24, of Local 5 News in Des Moines, Iowa, announced plans to live as a woman on the same day as applying for a name change.

“For a long time I didn’t think that I would get to say that,” Reichardt said during the broadcast, after announcing the new name. “At least not on air like this. I didn’t know if there was a place and a space for me to do this sort of work that I’ve really come to love and enjoy, while also getting to be myself.”

Reichardt said that the realization about being transgender came after not feeling a connection with their own image on the screen, prompting them to begin transitioning in September 2021.

“A while after I started being on air, I kind of just reached a personal breaking point where I thought, why don’t I like the person that I am seeing every time I am going out in the field? Why don’t I connect with that person? Why don’t I want to be that person?” Reichardt said.

Hi, everyone! I’ve been away from the spotlight for a few weeks, but I’m back and I’ve got some news to share. My name is Nora J.S. Reichardt, and in addition to being an on-air reporter for @weareiowa5news, I’m a transgender woman 🏳️‍⚧️🏳️‍⚧️🏳️‍⚧️ pic.twitter.com/6m155gV4Mf

“There was a decent span of time where everyone in my life functionally knew me as Nora, except for the viewers at home,” Reichardt said.

Reichardt was asked how people can be good “allies” to transgender people during an interview with We Are Iowa. The reporter responded, “when people tell you who they are, believe them. The very first thing that you tell someone after they come out to you really will dictate the tone of your relationship moving forward, for better or for worse.”

The reporter added, “being trans is not a burden. If someone is trusting you with that information, it means that you mean something to them. And they really want to get to share that.”

“I hope if anyone is ever in that position where someone is telling you something like this about themselves, the best thing you can do is tell them, I’m glad. I’m glad that you trust me, I’m glad that you are being who you are, and what can I do for you? Everyone needs something different. Every trans person has different standards about their comfort level with their dead name, or things like that. Just ask. We are not scary, I don’t think. There’s a sense that because people don’t have exposure to people like me so often, that they don’t even know where to start.” 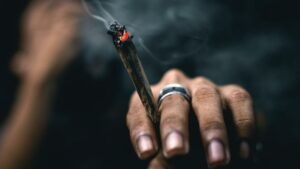