'Today, we begin to right these wrongs' Biden said

Biden’s executive action does not apply to individuals who were noncitizens and were unlawfully living in the U.S. at the time of the offense.

“As I’ve said before, no one should be in jail just for using or possessing marijuana,” Biden wrote on Twitter. “Today, I’m taking steps to end our failed approach.”

As I’ve said before, no one should be in jail just for using or possessing marijuana.

Today, I’m taking steps to end our failed approach. Allow me to lay them out.

A senior official within the Biden administration said that more than 6,500 people with prior convictions for simple marijuana possession will be affected by the pardon, according to CNBC.

Biden’s plan is consistent with recent polling, which shows that three-in-five voters believe marijuana should be legalized nationwide. That number includes 71 percent of Democrats, 47 percent of Republicans, and 61 percent of independent voters.

“There are thousands of people who were previously convicted of simple possession who may be denied employment, housing, or educational opportunities as a result. My pardon will remove this burden,” Biden wrote.

He also called on governors to pardon similar offenses at the state-level.

Marijuana is a Schedule I drug under the Controlled Substances Act (CSA). Schedule I narcotics are considered by the government to have a “high potential for abuse” and “no currently accepted medical use in treatment in the Unites States.”

The list of other narcotics currently classified as Schedule I include: Heroin, LSD, Mescaline, MDMA, and GHB.

Though multiple states have embraced de-criminalization of marijuana, as well as opening the door to legal use and recreational purchases of the plant, it is still — currently — criminalized at the federal level.

Biden says that he is now directing the U.S. Department of Health and Human Services to review how marijuana is scheduled under federal law.

“Sending people to jail for possessing marijuana has upended too many lives – for conduct that is legal in many states,” Biden wrote. “That’s before you address the clear racial disparities around prosecution and conviction. Today, we begin to right these wrongs.” 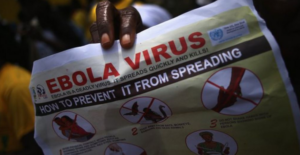 US Will Screen Travelers from Uganda for Ebola