INTERVIEW: Rudy Giuliani 'Heartbroken' Over What Pro-Crime Leftists Have Done to NYC

'Once we protect society, then we can consider criminals' the former mayor told Timcast

It is clear to see that crime in New York City has surged to frightening levels. Since Democrat-driven bail reforms were instituted in 2019, felonies are up 32% with murder being up 26%, according to city data. The midterm cycle was plagued with progressives making excuses for the uptick in crime while some attempted to ignore it altogether. One thing they can all agree on, though, is it’s not their fault. However, according to former Mayor Rudy Giuliani, this is all part of the far-left’s plan. He says that he’s “heartbroken” to see the current state of the city under control by Democrats like Hochul and Adams, and that there are up to 10,000 criminals walking the streets who he would’ve had in jail during his tenure.

Kathy Hochul is now the elected governor of New York, despite her abysmal record on crime. From cashless bail to banning the use of the word “inmate” in state laws to avoid “dehumanizing” them, her pro-criminal policies as an unelected bureaucrat will only continue for the next two years. Meanwhile, current NYC Mayor Eric Adams is doing everything he can to ignore the 25-year-high record of subway killings, even as ridership plummets. Instead, he’s focusing on welcoming an unprecedented wave of illegal migrants to his sanctuary city. Cops, parents, bodega workers, subway commuters, and everyday people walking down the street are living in fear. But what made it get to this point?

In an interview with Timcast, Guliani spoke about what he thought of Hochul recently calling the rise in crime a right-wing “conspiracy,” and claiming that “safer places are actually in Democratic states.”

“It began, actually, with Adams first saying that there isn’t as much crime on the subway as the media exaggerates – that’s how this all began,” he said.

He listed the policies that Rep. Lee Zeldin could have implemented if elected to gubernatorial office.

“[Hochul’s] take on it was when Zeldin cornered her in the debate, really nailed her on crime, with specific things he would do; declare a crime emergency, do away with the bail law, do away with the change in prosecuting juveniles as adults – even when they killed 20 people or something, doing away with the loosening of parole standards,” Guliani said.

In October, Zeldin announced that he would declare a crime emergency on day one in office, which would unlock executive powers that allow for him to suspend the state laws that limit cash bail, solitary confinement and the ways gunmen under the age of 18 can be tried in adult court. He also was in favor of removing liberal district attorney Alvin Bragg from office.

“I have publicly pledged that my first action, my first day will be to notify Manhattan District Attorney Alvin Bragg that he is going to be fired,” Zeldin told ABC Eyewitness News. “I believe there is a crime emergency in New York and I have publicly pledged that if the state legislature isn’t coming to the table, I will declare a crime emergency and suspend New York’s cashless bail law.”

While Hochul’s cashless bail system has been characterized as a necessary progressive policy, it’s plainly pro-crime. In fact, the man who attacked Zeldin at a campaign event was released on the same day, just as the Republican candidate had predicted.

After David Jakubonis allegedly tried to stab Zeldin with a bladed weapon during a July campaign stop, the congressman tweeted, “The attacker will likely be instantly released under NY’s laws.”

Jakubonis was released from jail within hours of his arrest.

According to Giuliani, Zeldin’s plans to tackle crime would’ve reversed the Democrat-controlled legislature’s policies that made such a mess in the last few years. There are thousands of people who are currently free to walk the streets who would’ve been in jail during his administration, the 107th Mayor of New York City said.

“All the things the legislature did two and a half years ago, basically to release, I think, about 10 to 12,000 prisoners to the street,” he said. “I would say there are anywhere from seven to eight, maybe 10,000 criminals walking the streets who would have been in prison when I was mayor, or Bloomberg.”

Guliani added: “That probably is your complete answer to why crime is up in New York.”

So – where do the spikes in crime come from? As Giuliani served as mayor from 1994-2001, and previously as the U.S. Associate Attorney General and the US Attorney for the Southern District of New York, he understands the complexities of why people commit crimes. However, he claims, the recent dramatic increase is politically manufactured.

“This is not, you know, caused by some kind of socioeconomic condition or disease… It isn’t even caused by climate change,” the former mayor joked. He then tore into a fellow former mayor Bill de Blasio and the disgraced former governor, Andrew Cuomo.

“It’s caused by progressive Democrat policies that began under de Blasio, were enacted, to a large extent, by Cuomo. Expanded by Hochul, particularly with regard to parole. She’s the one who really opened up parole, and then her phony tinkering with bail laws,” Giuliani said.

Well how did the man himself corral crime when he was running New York City?

“I was very aggressive in changing the judges and putting in judges who would consider not just being nice to criminals, but realizing that the justice system exists not to accommodate criminals, but to protect society,” Giuliani said.

“Once we protect society, then we can consider criminals. Of course we have to always be guided by their rights, but they have plenty of rights. There’s no reason to expand them.”

When asked what it is like to see his efforts to fight crime as mayor unravel, Guliani solemnly replied, “I don’t know how to describe it to you, I’m heartbroken. Heartbroken.”

“I mean… I saved more black lives than any mayor that ever existed. It’s not even close,” he continued. “I mean, you look at the 65% reduction in murder, 70-75% of the people murdered in New York City every year during that period, and now, are African American… It’s 1000s of people that didn’t die because we changed the rules.”

Giuliani’s thoughts represented a lot of voter’s feelings as they headed to the polls. Though Zeldin didn’t beat Hochul, he did much better than a Republican was expected to do in such a solidly blue state. 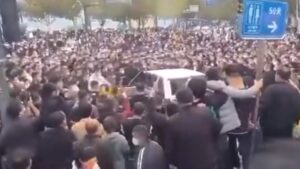