Consumer prices exploded to levels that have not been seen in nearly four decades in November, when Americans paid more for groceries, cars and gasoline among many other products.

The consumer price index rose 6.8% in November compared to a year ago, according to a new Labor Department report released Friday.

The report marked the fastest increase since June 1982, when inflation hit 7.1%. The CPI, which measures a bevy of goods ranging from gasoline to groceries and rent, jumped 0.8% in the one-month period from October.

Core prices in the report, items which exclude more volatile measurements of food and energy, saw an uptick of 4.9% in November — a significant increase from the 4.6% rise in October, which was itself the steepest rate since 1991.

Economists expected the index to show that prices surged 6.8% in November from the year-ago period and 0.7% from the previous month.

The price indexes tracking food and energy climbed 13-year highs with those indexes rising 6.1% and 33.3% respectively, over the 12-month period.

The Labor Department said the increases for food and energy were the fastest 12-month gains in at least 13 years — a sign of the continued struggle of Americans to manage cost of living while wage increases have not come close to the same rate of increase.

The inflation is eating away at strong gains, wages and salaries that American workers have seen in recent months.

The White House has said the price spike is the result of supply-chain bottlenecks and other pandemic-induced disruptions. However, a number of Republicans have pinned the problem on the president’s massive spending agenda.

Biden attempted to downplay the November inflation figure before its release, saying in a statement on Thursday that the data would not reflect the decline in gas prices. He stressed that passing his $1.7 trillion social spending and climate plan is necessary to help lower costs.

Editor’s Note: A previous version of this article included a headline that stated the inflation was at an “all-time” high, when in fact it was at a 39-year high. The title has been revised to reflect that fact. 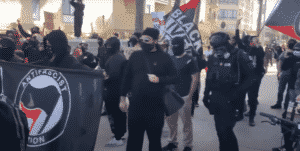