The San Diego County District Attorney’s office is leading a first-of-its-kind effort to break up a suspected network of violent Antifa cells.

This week, the District Attorney’s office charged a group of accused Antifa members with federal conspiracy and assault charges that stem from a violent clash in January of this year. The 11 accused people took part in a “counterprotest” that developed into attacks on people attending the Patriots March in Pacific Beach, California.

The charging document says those involved are “alleged to be affiliated with ANTIFA and are organized into two groups, one originating from Los Angeles and the other from San Diego.”

“ANTIFA is known to use force, fear, and violence to further their own interests and to suppress the interests of others,” the document continues. “This tactic is referred to as ‘Direct Action’ and is known to mean acts of violence such as assault, battery, assault with deadly weapons, arson, and vandalism. The alleged object of this conspiracy was to incite and participate in a riot using direct action tactics.”

At the Jan. 9 event, videos captured Antifa members dressed in black, with their faces covered, and carrying bats as they chased people attending the rally in support of President Doanld Trump. Carrying Antifa logos and flags, the group surrounded and attacked anyone they thought was at the Pacific Beach pier for the event, harassing unaffiliated bystanders including pepper-spraying a man walking his dog.

Several more altercations between the counter-protestors and others at the Boardwalk.

The counter-protestors shout “Proud Boy Killer,” as several people are chased out of the area. pic.twitter.com/UzczqlREtP

In a statement to the press, the San Diego District Attorney’s Office said that the Antifa members assaulted journalists and minors, one of whom was transported to the hospital to be treated for a concussion.

“According to the criminal complaint, ‘Antifa supporters’ had posted on social media calling for a counter direct action against the Trump rally days before,” reports Newsweek. “During the riots in 2020 and 2021 in West Coast coast cities like Portland, Seattle and Los Angeles, violent direct actions by Antifa and leftist groups were announced and promoted on Twitter.”

Antifa-affiliated groups are now fundraising for the accused men’s bail on Twitter. They are directing their supporters to CashApp and Venmo accounts, the far-left groups’ preferred payment platforms.

PayPal, which owns Venmo, told Newsweek “the service allows any legal fundraising regardless of the nature of the criminal allegations.” 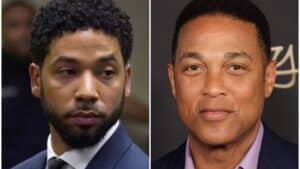 Don Lemon No Longer a Supporter of Jussie Smollett