Illinois Governor J.B. Pritzker required all students to wear masks while in school

Two Illinois public schools that are not following the governor’s mask mandate have had their statuses restored after being sanctioned for noncompliance.

In addition to reinstatement of the schools’ statuses, a judge in Effingham County also issued a temporary restraining order against the Illinois State Board of Education.

In early August, Governor J.B. Pritzker mandated that all students — regardless of vaccination status — must wear a mask while attending school. He cited the prevalence of the Delta variant of COVID-19.

Days into the new school year, 36 public and nonpublic schools were put on probation by the ISBE for not enforcing the policy. The districts were then required to a corrective action plan to fix the “deficiencies” that posed “a danger to students and staff,” the board said in a statement.

Cowden-Herrick and Beecher City school districts were downgraded from “fully recognized” to “on probation” by the ISBE the State Superintendent of Education when their school boards failed to enact a mask requirement as required under an executive order issued by the governor.

While initially on probation, Red Hill eventually complied with the mandate and had its status restored.

On Wednesday, Judge Jeffrey DeLong wrote, “Beecher City and Cowden-Herrick’s recognition status is hereby restored to ‘fully recognized’ … until such time as the Court has held a preliminary injunction hearing and ruled on the District’s request for a preliminary injunction. … The State Superintendent is hereby enjoined from altering the recontamination status of the Districts except as authorized during the annual compliance provisions.”

“This lawsuit is not about the Governor’s Executive order mandating masks,” DeVore told the judge.

DeVore argued neither ISBE nor Dr. Carmen I. Ayala, the State Superintendent, have the “legal authority to lower the status of the Cowden-Herrick and Beecher City school districts.” Furthermore, the state board has “an appeals process in place for districts who have been placed on probation, noting that the appeals process only applies when a district is ‘non-recognized’ – the next step after probation,” per Effingham Daily News.

Attorney Tara Barnett from the Illinois Attorney General’s office argued that the governor’s mandate was a law and that the ISBE was within its power to allow Ayala to decide on the school’s recognition status. 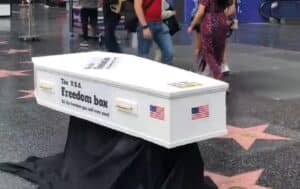