A group of migrants attempting to cross the southern border offered Daily Caller reporter Jorge Ventura a “little girl” in exchange for helping them.

Ventura was reporting from Yuma, Arizona, when the exchange took place.

“The two men you see here are actually walking back to the Mexican side. They were actually Mexican nationals that were trying to cross into the country illegally. They saw border patrol so they actually started to walk back. But they actually tried to get me to drive them into Yuma and one of them said that he would offer me a nine-year-old little girl if I did it,” Ventura recounted in a report for the Daily Caller.

Mexican nationals crossed illegally with a large migrant group from South America were trying to convince me to drive them into Yuma and would give me a ‘little girl’ in exchange, after I refused and they saw border patrol finally arrive they headed back to Mexico pic.twitter.com/QHe2NIJ096

Ventura said that the group did not have the child with them but claimed that they could get him a 9-year-old girl.

“My initial reaction was just pure shock that they would say something like that so casually, like as if it was completely normal,” Ventura said per the Caller report.

The reporter also noted that most migrants he encounters hope to be apprehended by border patrol in the United States so that they can make their asylum claim, but this group was trying to dodge them.

“They just kept trying to convince me to drive them in my truck into the town of Yuma and they were really concerned about being apprehended by border patrol which is the opposite from other migrants who actually want to be apprehended.”

Yuma Mayor Douglas Nicholls declared a local emergency on Thursday, due to the “influx of these undocumented persons entering the Yuma area … resulting in a humanitarian and border crisis.”

“A significant number of migrants are entering the Yuma area and federal agency personnel are struggling to manage the flow of migrants in the community and at federal facilities. Within the last five days, there have been reports of over 6,000 migrants crossing from Mexico into the United States traveling through the Yuma area. The U. S. Customs and Border Protection reports the number of migrant encounters have increased by 2,647 percent since Oct. 1,” Nicholls, a Republican, said in a press release about the emergency. 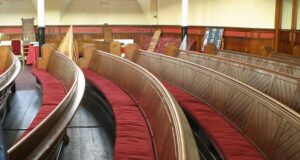