The number of illegal immigrants encountered by U.S. Border Patrol agents jumped by nearly 130% in one year.

Most encounters occurred in Texas’s Rio Grande Valley, with 45,324 crossing this fiscal year so far occurring in the region.

The majority of the single adults were from Mexico, followed by Honduras, Guatemala and El Salvador.

Agents on the southern border processed 12,268 people for expedited removal, 1,851 for reinstatement of prior removal, and 2,303 for voluntary return.

“Since March 2020, the U.S. has used Title 42, named for a public health law, to expel adults and families without an opportunity for asylum; unaccompanied children are exempt,” reports CBS Local. “But the Biden administration has exercised that authority on only about one of every four who come in families, largely due to resource constraints and Mexico’s reluctance to take back Central American families.”

Currently, a caravan of approximately 2,000 Central American and Haitian migrants is traveling toward the U.S.-Mexico border. They left Tapachula, a city over 1,100 miles south of the Rio Grande Valley.

“The caravans began several years ago as a way for migrants who did not have the money to pay smugglers to take advantage of safety in numbers as they moved toward the U.S. border,” reports AP News. “However, more recently Guatemala and Mexico have become more aggressive in quickly breaking up the caravans with security forces.”

“In the past year alone, U.S. Border Patrol has recorded nearly 1.7 million migrant apprehensions at the southern border, which is the highest number of illegal crossings in history,” the lawmakers wrote. “If the Administration does not begin to appropriately respond to these caravans and the ongoing border crisis, these surges will surely continue.” 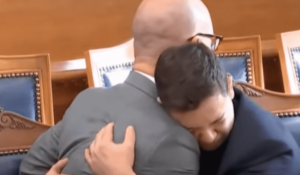 BREAKING NEWS: Kyle Rittenhouse Found Not Guilty on All Charges