'There's a Lot of Things that I Love About Hitler': Ye Calls Hitler 'Cool Leader,' Makes Other Antisemitic Comments During Infowars Appearance

'You Can't Say Out Loud That [Hitler] Ever Did Anything Good, And I'm Done With That'

Ye, formerly known as Kanye West, said “I like Hitler” and other controversial statements during a Thursday appearance on Alex Jones’ Infowars.

Ye appeared on Jones’ show wearing a black hood covering his head and face. Before a commercial break, Jones said he didn’t like Nazis to which Ye replied, “I like Hitler.”

Shortly after the program resumed, Jones attempted to understand Ye’s comment, suggesting he didn’t deserve to be referred to as “Nazi” and broadly demonized for his recent antisemitic comments.

“You can’t say out loud that [Hitler] ever did anything good, and I’m done with that, I’m done with the classifications,” he continued. “Every human being has value that they brought to the table, especially Hitler.”

“The Nazis, in my view, were thugs, shut people down and did a lot of really bad things,” Jones replied.

Ye cut off Jones’ comment, saying, “But they did good things too” in reference to Nazis.

“We gotta stop dissing the Nazis all the time,” said Ye.

Ye: “We gotta stop dissing the Nazis all the time” pic.twitter.com/BUEvT1buMH

Throughout the interview, Ye made a number of comments regarding Hitler and Jewish people, including referring to his mother’s death and Michael Jordan’s father’s murder as “Zionist sacrifices.”

Alex Jones desperately tries to get Kanye West to clarify that he doesn’t actually love Hitler … but nope.

Ye went on to say, “Germans had a really cool leader at one time.”

Later in the segment, Ye said he wanted to read “jokes” sent to him by comedian Owen Benjamin. The jokes took aim at Daily Wire host Ben Shapiro, who is open about his Jewish heritage and faith. The jokes played on Jewish stereotypes, suggesting Shapiro could tell how much money someone had by the sound of change jingling in their pocket.

Jones appeared to be uncomfortable throughout Ye’s diatribe, though reiterated that while he disagrees with the rapper he believes he should be allowed to express his opinions.

Ye also acted out a fake conversation with Israeli Prime Minister Benjamin Nentanyahu using a fish net as a prop as a play on the Prime Minister’s last name. The rapper and ostensible 2024 presidential candidate also detailed his divorce from ex-wife Kim Kardashian, saying he turned to alcohol and sexual activity with multiple partners following their separation.

“Since I lost my wife, since I lost my family and was no longer the priest in my home and have the say so, I was frustrated and I let the devil come and get me,” said Ye. “I let the devil pull me in. Next thing you know I’m at New Year’s Eve parties having threesomes.”

Ye recently lost partnerships with Adidas, Gap and Balenciaga following a tweet in which the rapper said he would go “death con 3″on Jews in October.

Correction: Owen Benjamin is not an Infowars host, as this article previously stated. The story has been updated to clarify that he is a comedian.
*For corrections please email [email protected]*
Share
Next 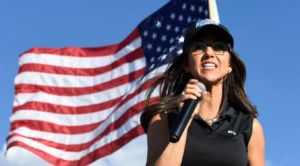