House Republicans have ordered the Department of Justice (DOJ) to preserve documents related to the Department’s alleged investigation into parents who question local school boards.

“We are investigating the Biden Administration’s misuse of federal criminal and counterterrorism resources to target concerned parents at school board meetings,” the letter states.

The lawmakers were referring to a memo issued by Garland on Oct. 4. 2021 directing federal authorities to hold strategy sessions to address a “disturbing spike in harassment, intimidation, and threats of violence” against school officials. Garland vowed “coordination and partnership with local law enforcement” in mounting a federal response to parents deemed threats.

Garland’s directive was said to have been issued in response to a letter sent to the DOJ by two top officials at the National School Boards Association (NSBA) claiming that educators and school board members were “under immediate threat” after angry parents showed up at school board meetings to question and protest restrictive pandemic-related policies.

The NSBA requested the “federal government’s intervention” against those parents.

Fact checkers have argued that the DOJ never directly called parents “domestic terrorists.” However, a memo dated Oct. 12. 2021, confirmed that prior to the NSBA’s letter, the organization had already been colluding with the White House, DOJ, Department of Homeland Security, Department of Education, U.S Surgeon General and other federal agencies on how federal officials could take action against concerned parents. Their labeling of parents as domestic terrorists was pursuant to conversations with federal officials.

“We know from whistleblowers and publicly available information that the Biden White House colluded with the NSBA to manufacture a pretext for the use of federal law-enforcement authorities against parents, which you operationalized via a memorandum dated October 4, 2021,” Republican lawmakers stated in the record retention request.

“Since October 2021, we have sent over 100 letters to Departmental components requesting documents and information regarding the Biden Administration’s misuse of law-enforcement resources,” they added. “To date, the Department has responded to these requests with only two half-page letters, and has not produced any of the requested documents of information.”

Rep. Jordan and Rep. Johnson formally requested the DOJ to preserve for future investigation all related documents, communication, and other information — including metadata, electronic messages sent from work or personal devices, and messages sent through phone-based encrypted messaging services. 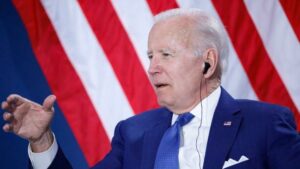