Biden will be the first octogenarian president in U.S. history

President Biden’s upcoming birthday will receive little fanfare from the White House amid concerns over his age and fitness to hold office.

On Nov. 2o, Biden will turn 80, making him the first octogenarian president in history. Biden has already set the record for oldest sitting U.S. President, having beat President Ronald Reagan, who was 77-years-old at the completion of his second term.

The White House is well-aware of the concern over his age and, ahead of Biden’s birthday, is “bracing for the inevitable news cycle,” according to Politico.

Staffers told the news outlet that they are planning to downplay the event and focus on work.

“Like President Biden has said, anyone with questions about his age should just watch him: he has delivered record job creation, made NATO the strongest it has ever been, and amassed the most significant legislative record since LBJ in less than half of one term,” Politico quoted Andrew Bates, White House spokesman, as saying. “I don’t have a comment about whether POLITICO is invited to his birthday.”

Throughout his presidency, there have been persistent suggestions that Biden may be too old to be the president.

In the summer of 2021, a number of gaffes during interviews, including Biden fumbling questions regarding his administration’s handling of the Afghanistan pullout, and mixing up details about his own son.

“But just as a doctor observing him, given his medical history and age, I’m worried about early onset dementia,” Dr. Aseem Malhotra, an NHS consultant and expert in evidence-based medicine, said at the time. “I would be worried about anyone exhibiting issues with recall and memory at Joe Biden’s age.”

Questions were again raised in September 2022 after Biden asked about the whereabouts of a deceased lawmaker at an event.

In October, billionaire Elon Musk called Biden too old to be president, telling a reporter, “You don’t want to be too far from the average age of the population because it’s going to be very difficult to stay in touch.”

“We haven’t had an 80-year-old president before, but if any lesson emerges from modern history, it is that if a president seems vigorous and well and is doing the job, age has been less of a factor for voters,” presidential historian Michael Beschloss told Politico. “When a president plans to run for reelection at an age the voters haven’t seen before, history suggests that the burden has been on the candidate to show that age will not be a problem.” 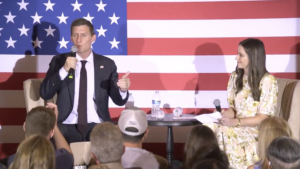