Congress voted to increase federal resources earmarked for the prevention of domestic terrorism.

The policy includes the creation of a task force involving multiple federal agencies to end the alleged infiltration of uniformed services and law enforcement agencies by white supremacists and neo-Nazis.

The vote comes after racially motivated shootings in New York and California over the weekend.

If made law, the bill would grant the Department of Homeland Security, the Department of Justice, and the Federal Bureau of Investigation the right to “monitor, analyze, investigate, and prosecute domestic terrorism.”

The agencies would release joint reports about the state of domestic terrorism. The bill, House Resolution 350, names explicitly “white-supremacist-related incidents or attempted incidents” as a focus of the report.

The DHS, DOJ, and the FBI would need to review the anti-terrorism training and resource programs they offer to federal, state, local, and tribal law enforcement agencies “in understanding, detecting, deterring, and investigating acts of domestic terrorism and White supremacist and neo-Nazi infiltration of law enforcement and corrections agencies.”

The DOJ will also be required to provide additional training to prosecutors and assistant U.S. attorneys so they are aware of the ways domestic terrorism can be prosecuted.

“We in Congress can’t stop the likes of Tucker Carlson from spewing hateful, dangerous replacement theory ideology across the airwaves. Congress hasn’t been able to ban the sale of assault weapons,” Schnider told Congress.

Republican members of Congress objected to the narrow scope of the bill’s focus, arguing that it does nothing to prevent domestic terrorism committed by the far-left.

“This bill glaringly ignores the persistent domestic terrorism threat from the radical left in this country and instead makes the assumption that it is all on the white and the right,” argued California Representative Darrell Issa, per CBS News.

Texas Representative Chip Roy expressed concern that the bill’s purpose was the “empowerment of the federal bureaucracy to target Americans.”

“This is nothing more than empowering the federal government to police thought and speech in the United States of America, and we should oppose it roundly,” he said during the debate.

The weekend proceeding the bill’s reintroduction in Congress was marked by two planned, mass shootings carried out by gunmen motivated by ethnocentric ideology.

On May 14, 18-year-old Payton Gendron killed 11 people during a shooting at a grocery store in Buffalo, New York, in a majority-black neighborhood. Gendron livestreamed the attack on Twitch.

Gendron published a 180-page manifesto where he identified as a white supremacist and said he was acting alone and not as part of a political group or organization.

The shooter was indicted on a first-degree murder charge by a grand jury in New York on May 19.

The following day, May 15, a 68-year-old man from Las Vegas traveled to California and opened fire on the Irvine Taiwanese Presbyterian Church.

David Chou, the gunman, is being investigated by the FBI on hate crime charges and is being held on a $1 million bail.

At a press conference, Orange County District Attorney Todd Spitzer said Chou’s family was taken by force from mainland China to Taiwan after 1948. The Presbyterian Church was celebrating the return of a pastor from a mission trip to Taiwan on the day of the shooting.

Spitzer said Chou planned to “execute in cold blood as many people in that room as possible.”

“He had the ammunition to do it,” the attorney general said. “He had the weaponry to do it. He had the training to do it.”

The gunman allegedly mailed “seven volumes of handwritten notes” to the Los Angeles office of a Chinese-language newspaper prior to the shooting, reports the East Bay Times.

Chou is facing 10 charges, including first-degree murder, five counts of attempted murder and four counts of possessing destructive devices with the intent to kill or harm.

His arraignment has been delayed until June 10. 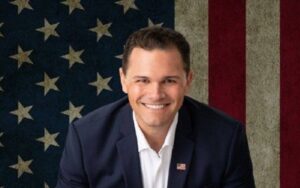