The House of Representatives passed a symbolic bill supporting Sweden and Finland to join NATO.

The policy was supported by 394 members although it has no official barring on the nations’ pending memberships. The formal ratification process for new NATO members is ultimately conducted by the Senate.

Congresswoman Marjorie Taylor Greene, who joined the opposition, has been a vocal critic of the United State’s involvement in NATO.

“The American people do not want war with Russia, but NATO & our own foolish leaders are dragging us into one. A war that no one will win,” the congresswoman wrote on Twitter on June 29.

“Escalation over Ukraine, a non-member nation, risking nuclear war is a power play endangering the entire world,” Greene added. “We should pull out of NATO.”

Texas Congressman Chip Roy responded to critics of his and other representatives’ decision to vote ‘no’ by listing the military alliance’s shortcomings.

“I might support expanding NATO if 1) NATO were doing all it should & upholding [its] end of bargain. It isn’t; 2) our own govt were briefing us on Ukraine & our actual strategy/use of $56BB; 3) our own DOD were not a woke disaster, expecting us to blindly support (e.g. NDAA),” he wrote in an exchange on Twitter.

“America can’t afford to subsidize socialist Europe’s defense, nor should we,” he said in a July 18 post.

Additionally, 17 Republicans opted not to take part in the vote. Two Democrats also did not cast a vote.

Sweden and Finland applied in May to join the military alliance after months of debate following Russia’s Feb. 24 invasion of Ukraine.

While Ukraine is an ally of the United States, it was neither a member of NATO nor a member of the European Union. Both groups have pledged to support the nation amid the ongoing conflict with Russia. Ukraine applied for EU membership four days after Russia’s initial invasion.

Russian President Vladimir Putin had said promises that Ukraine would not be admitted to NATO in the near future were insufficient prior to the Feb. 24 invasion.

“We need to resolve this question now … [and] we hope very much our concern will be heard by our partners and taken seriously,” Putin said while speaking to reporters in Moscow in February, per Al Jazeera. “As for war in Europe … about whether we want it or not? Of course not. That is why we put forward proposals for a negotiation process, the result of which should be an agreement on ensuring equal security for everyone, including our country.”

Citing national security concerns, Putin had asked the Western alliance to agree that Ukraine would never be granted membership.

The July 18 vote was not the first time House Republicans have voted against a NATO initiative. In April, 63 Republicans voted against a nonbinding resolution to reaffirm “unequivocal support for the North Atlantic Treaty Organization (NATO) as an alliance founded on democratic principles” and underscore the nation’s “support for shared democratic values and committed to enhancing NATO’s capacity to strengthen democratic institutions within NATO member, partner, and aspirant countries.”

The resolution would have urged President Joe Biden “to use the voice and vote of the United States to establish a Center for Democratic Resilience within NATO headquarters.”

In total, 362 members — including every House Democrat — voted in favor of the initiative. 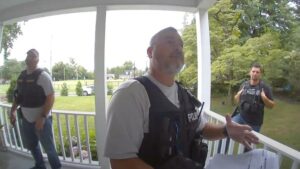