Homeowner believes he was coerced into giving consent

A Delaware man received a visit from federal agents questioning legal gun purchases he recently made after he was flagged in a government database.

The agents, who admitted they did not obtain a warrant to conduct the search, were investigating because the homeowner was flagged in a federal database for having purchased seven firearms since January 2022 — which is not a crime.

ATF agents wanted to see each weapon and verify the serial numbers to make sure each was still in his possession. They cited an increase in straw purchases as the basis for questioning him.

“Look, all I’m doing is verifying that you have it. You’ve got two different purchases,” the ATF agent closest to the door said to the man. “If you have them, I’m out of here. That’s how quick it is.”

“Do you have them with you, by any chance?”

The homeowner told the agent the firearms were located in his safe.

“If you can unload them and bring them out, or we can go out to your foyer here, check them out, write down the serial number, and we’re out of here,” the ATF agent replied.

No warrant, no search! https://t.co/GzzgENjHuy

“The reason we’re out here is, we’re, obviously gun violence is in an uptick. So, we want to make sure, we’ve been having a lot of issues with straw purchases,” the Delaware State Police officer told the homeowner.

He went on to say that one of the indicators they get is someone making a large gun purchase and when law enforcement goes to verify that the purchaser has the firearms, officers are told that the guns were lost, missing or stolen.

“Sir, the idea is when you purchase more than two guns at a time it generates a multiple sales report and it comes to us and we have to check them out. That’s all that is,” the ATF agent explained. “You did nothing wrong, absolutely zero.”

The ATF is allowed to conduct warrantless searches of certain firearm retailers “for the purpose of inspecting or examining any records or documents required to be kept by the law and regulations and any explosive materials kept or stored at the premises.”

ATF agents must obtain a warrant prior to conducting a search of the residence of law abiding U.S. citizens. Law enforcement officers, however, may proceed with a search if they obtain consent from the party of whom the search has been requested.

According to an independent gun advocacy group, the homeowner retrieved a single rifle and allowed the agent to verify the serial number.

When asked if he needed to show agents the rest of the firearms, they said it wasn’t necessary, and apologized for the inconvenience before leaving.

The homeowner reportedly stated that he believes he was coerced into giving consent. 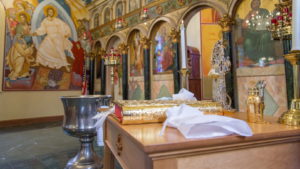