The Greek Orthodox Church is speaking out after an American archbishop baptized the children of a celebrity fashion designer and his same-sex partner.

Designer Peter Dundas and actor Evangelo Bousis agreed to have their children baptized in the Orthodox Church in honor of Bousis’s Greek heritage. The couple has a son and a daughter who both were born via surrogate.

The couple hosted a private event on July 9 outside of Athens, where the baptismal ceremony was conducted by Archbishop Elipidophoros who leads an American church.

Same-sex unions and marriages are not recognized by the Greek Orthodox Church. While same-sex couples can be granted legal cohabitation agreements, gay marriage is not legal in Greece.

The governing Holy Synod of the Greek Orthodox Church announced on July 18 that it will send an official letter of complaint to Elpidophoros and to the world’s spiritual leader of Orthodox Christians, Ecumenical Patriarch Bartholomew.

The Church was informed about Dundas and Bousis’s ceremony by Metropolitan Bishop Antonios of Glyfada. Bishop Antonios told the church that when he had granted Elipidophoros permission to conduct the baptism, he was not aware the children’s parents were a same-sex couple.

“Archbishop Elpidophoros did not immediately respond to the Greek church’s objection,” reports AP News. “His official Twitter account featured an excerpt from a July 2 speech in New York in which he spoke out about the need for religion to heal divisions in society.”

After the baptism, a ceremony was held at the Four Seasons Resort in Vouliagmeni.

Dundas and Bousis told WWD that the ceremony “was the first Greek Orthodox baptism for the children of a gay couple in Greece.”

The Norwegian designer – whose designs have been worn by Mary J. Blige, Beyoncé, Amy Adams, Olivia Wilde, and Reese Witherspoon – said Archbishop Elpidophoros “agreed all children are accepted in God’s eyes and have a right to be baptized.”

“He is pushing for change in the Orthodox religion for the youth, and opening doors for everyone instead of turning people away,” Dundas said.

“We also thought it was important, in this time and age, that there was a change in the Orthodox Church, and that the children of gay and same-sex parents are able to be christened,” Dundas added during the interview. “We feel all children should have the opportunity to be blessed regardless of what faith and religion they believe in.”

Shortly after their son’s birth in June of 2021, Dundas and Bousis discussed their experience with surrogacy and parenthood with Vogue.

“Being in LA made everything easier: It’s normal here to have a family the way we’ve created our family,” Bousis said. “You’d be surprised, people don’t know that much about it or how two men can have a baby, even when we’re living in 2021.”

“People are on so many different levels on certain things in society, and it changes from city to city,” Dundas added. “I know people that have moved to LA for that reason. Here their child can go to school where there are other couples like ours.”

Bousis also noted they had taken their son after his birth to be blessed by a priest following his mother’s encouragement.

“Hopefully things will change, the way gay couples are looked at having a family,” Bousis said. “I think the more people talk about it, the better I think it is just to normalize it all because it should be something normal.” 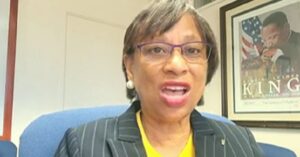