The Texas governor is increasing efforts to enforce border security

In a statement online, the governor’s office said that “in addition to performing a law enforcement function, the Texas National Guard is also helping with the early stages of constructing border barriers and a border wall.”

Last month, the governor had enlisted the Guard to help the Department of Public Safety make arrests along the U.S.-Mexico border. The move was an expansion of Abbott’s June disaster declaration, which allowed the use of state resources to assist with the enforcement of state and federal law.

“The Texas National Guard is playing an unprecedented role to secure the border because of the unprecedented refusal of the federal government to fulfill its obligations under federal law,” said Governor Abbott.

The Guard is playing an unprecedented role to secure the border due to Biden's refusal to enforce the law. pic.twitter.com/XR6Reyz8kH

According to Homeland Security Secretary Alejandro Mayorkas, an estimated 213,000 migrants were encountered at the southern border in July. This was a 13% increase over the already massive 188,000 migrant encounters in June. In July 2020, there were just 40,929 encounters, per Fox News.

“The Texas House Appropriations Committee is set to discuss additional funding for border security and the deployment of more National Guard troops this week,” says KVUE.

Among the 17 items specified for the session, the governor included “Legislation enhancing criminal laws or providing funding from unappropriated available revenues to support law-enforcement agencies, counties, and other strategies as part of Texas’ comprehensive border security plan.”

Abbott is looking to secure state funding for the initial construction of a border wall. The project, which would span over 700 miles of the Texas-Mexico border, would take about $1.7 million.

“If approved by lawmakers, the spending package would boost Texas’ border security budget to nearly $3 billion over the next two years, with more than $1 billion already earmarked in the spring,” says the Houston Chronicle. “The most recent two-year budget contained about $800 million for border security operations.”

Although Abbot has been criticized over his efforts to control illegal immigration, the governor has indicated the Biden administration’s decision to repeal Trump’s “Wait in Mexico” policy was to blame. On Tuesday, the U.S. Supreme Court ordered the White House to reinstate the policy, which requires asylum seekers at the southern border to wait in Mexico for their cases to be processed. 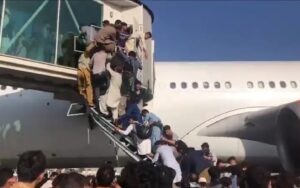