The remarks were made during an interview with CBS News reporter Norah O’Donnell following two deadly mass shootings carried out over the past several days.

“The second amendment is a suicide pact,” @GavinNewsom tells us tonight on the @CBSEveningNews. #MontereyPark #GovernorNewsom pic.twitter.com/I5kyx9O1AU

“I mean, the Second Amendment is becoming a suicide pact. And that’s the only question the community wants [answered]. What about our kids when they’re going to school?” Newsom said while walking though a neighborhood with O’Donnell.

Newsom said state officials looked at a half dozen gun safety bills last year and pledged to find “whatever loopholes we can” and to “lead the national conversation on gun safety reform.”

California fell victim to three separate mass shooting incidents in recent days. One was carried out in Monterey Park, and the other at Half Moon Bay. Both alleged shooters are Asian men.

What the hell is going on

Eleven people have now been confirmed dead, with nine others injured in the shooting incident at Monterey Park, near Los Angeles. The violence erupted at night on Jan. 21 inside of a dance studio, where an event was commemorating the Lunar New Year, an important celebration among east and southeast Asian cultures.

On Monday, Jan. 23, seven people were killed in a pair of shootings at agricultural facilities in Half Moon Bay, roughly 30 miles south of San Francisco.

Despite California already having the strictest gun control laws in the nation, state officials are still plotting ways to get more laws codified restricting access to firearms.

“Our message to the criminals spreading illegal weapons in California is simple: you have no safe harbor here in the Golden State. While the Supreme Court rolls back reasonable gun safety measures, California continues adding new ways to protect the lives of our kids,” Newsom said in a statement at the time. “California will use every tool at its disposal to save lives, especially in the face of an increasingly extreme Supreme Court.” 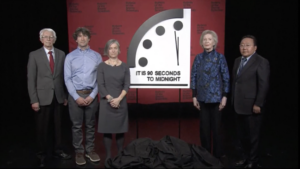