A “good guy with a gun” saved a woman in a Memphis parking lot on Friday as two men attempted to abduct her.

The ambush occurred around 8 pm in the parking lot at the Shops of Saddle Creek on West Farmington Boulevard.

A bystander filmed the incident.

The blonde woman, who has not been publicly identified, was getting into her SUV when two men in hoodies jumped out of their vehicle, which was parked next to hers. The woman attempted to fight them off but appeared to be overpowered.

Moments after the attack began, a man enters the frame holding a gun and confronts the attackers.

The woman is seen running away as the two men jump into the silver four-door and speed off.

“Attempted abduction at Saddle Creek yesterday!” Earle Farrell, who posted the video, wrote on Facebook. “Be aware of who you are parked near. If it looks suspicious. Don’t get out or avoid going back to car! Note all of the empty parking places around her car. Yet this car is right up next to her car! Stay alert at all times! Thank God for brave man who steps in and stops crime!”

The Daily Mail reports that the armed good samaritan has not been identified.

“The investigation is still active,” Simpson said. “We are still following up on leads, and we do have some things that are pertinent to the investigation.”

The vehicle appeared to be a Ford.

No suspects have been taken into custody, and police are asking anyone with information to contact the Germantown Police Department at 901-754-7222 or [email protected] 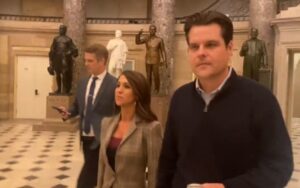