In its announcement, the brand cited the rising number of  COVID-19 cases in Europe as the cause of the decision.

The fashion house canceled both its planned runway show at Milan’s Men’s Fashion Week as well as its show at Paris Couture Week.

“Other luxury brands, including Italy’s Dolce & Gabbana, Prada and Zegna, are still due to present new collections at the show in Milan, which runs Jan. 14 to 18. The Paris show, which opens on Jan. 24, also has a packed schedule, with brands including Chanel and Christian Dior set to take part,” per The Wall Street Journal.

In December, 22 brands were scheduled to appear at Milan’s menswear event. Nine brands had chosen to stage digital presentations. Mian’s Fashion council said the event would have a limited attendee and that masks would be required.

Giorgio Armani, the company’s 87-year-old leader, referred to “the worsening epidemiological situation” in a statement on LinkedIn.

“The shows are crucial and irreplaceable occasions but the health and safety of both employees and the public must once again take priority,” he said.

Armani was the first design to end live shows because of COVID-19 in February of 2020. His brand broadcasted a runway show, that was filmed in an empty theater, from its website and social media pages. No press of buyers were present.

The British Fashion Council had previously announced its January menswear shows” would not go ahead due to COVID and that she scheduled shows would be added to the February womenswear calendar.

“We deeply understand the decision by Mr. Armani to cancel his fashion show,” said the president of Italy’s Camera Della Moda, Carlo Capasa, in a Jan. 4 statement. He noted current COVID-19 regulation in Italy allows the event to continue, provided attendees can show proof of vaccination and wear an appropriate mask.

Capasa added, “It is possible that in the forthcoming days there may be some changes to the calendar of the Fashion Week… always with the greatest attention to the complex health situation that Italy is in, some events which to date cannot be held as originally imagined may have to be canceled or postponed.”

Milan and its region have been classified as a “yellow zone” due to recent COVID-19 infection rates. Among the restrictions in place, masks are required indoors and outdoors.

France has reported more than 160,000 new cases daily. At the end of December, Paris officials announced anyone over the age of 11 would be required to wear masks outdoors and in any public area. Prime Minister Jean Castex also said, beginning in January, citizens would be required to work from home at least three days a week. Outdoor gatherings were limited to 5,000 people.

No other brands involved in wither fashion show have said if they intend to follow Giorgio Armani’s lead and withdraw. 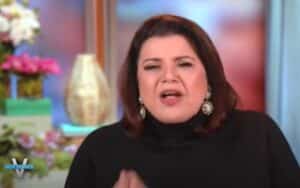 WATCH: Ana Navarro Claims on The View That Donald Trump Was Illegitimately Elected in 2016