WATCH: Ana Navarro Claims on The View That Donald Trump Was Illegitimately Elected in 2016

Ana Navarro claimed as a guest co-host on The View that former President Donald Trump was illegitimately elected in 2016.

Navarro and the regular co-hosts were all appearing remotely due to the recent surge of COVID-19 cases.

“There’s things which I think should transcend partisanship and should transcend politics, and a breach of the U.S. Capitol, an attack on our democratic principles and institutions should be one of those things, and I really blame Republicans at the top for capitulating to Trump,” Navarro said.

Navarro went on to reference “the big lie,” a mainstream media nickname for Trump’s assertion that Joe Biden was not the rightful winner of the 2020 election.

“I blame Trump for continuing this environment of lies and conspiracy theories and not accepting that he lost, and encouraging and promoting what happened, the Big Lie and what happened on Jan. 6,” she continued. “He bears responsibility, and it’s not just me saying this.”

Navarro next turned her ire towards House Minority Leader Kevin McCarthy, quoting him condemning the events on January 6, while still seeming to support Trump.

“And we’ve seen Republican after Republican who on Jan. 6 was shocked and calling for investigation, and for truth and for reaction and action from Trump. We’ve seen them bow down to Trump because they want to stay elected, and because they’re putting their own positions over democracy and over defending the U.S. institution of a legitimate election,” Navarro continued.

Finally, the guest co-host revealed that she believes that the 2016 election was the one that was stolen.

“Look, I felt – I felt that Donald Trump had not been legitimately elected. I felt he’d gotten help from the Russians, but you know what? It would have never occurred to me to take up arms against Donald Trump. That’s just not what we do in America,” Navarro said. “Our weapon of choice is voting, is democracy, it’s the ballot, and so I hope that people remember Jan. 6. You know why? You know how? By registering to vote. By making sure they know where they have to show up to vote because there are elections this year and they are so crucial.”

The conspiracy theory that Trump had colluded with Russia to win the election has been debunked by an investigation led by Special Counsel Robert Mueller.

“The Special Counsel did not find that the Trump campaign, or anyone associated with it, conspired or coordinated with the Russian government in these efforts, despite multiple offers from Russian-affiliated individuals to assist the Trump campaign,” the investigation determined. 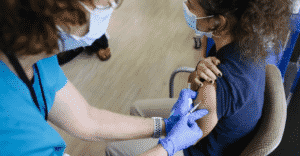