Georgia Governor Brian Kemp is the projected winner over Stacey Abrams in the 2022 midterm elections, marking the second time the incumbent Republican governor has notched an election night win against Abrams.

Kemp first defeated Abrams in the 2018 midterms, winning by 54,723 votes. After her defeat, Abrams refused to concede, blaming her election loss on allegations that Kemp engaged in voter suppression.

Kemp’s victory tonight is punctuated by historic voter turnout, which may quell allegations of voter suppression that have dogged Georgia since its state legislatures passed election integrity legislation.

After her defeat in 2018, Abrams created a nonprofit organization called Fair Fight Action, which promotes fair elections around the country, and provides voter education programs and communications.

Throughout all of 2022, Kemp has maintained a significant lead over Abrams. RealClearPolitics polling showed Kemp with an eight-point lead the night before the midterms. The same night, Kemp led Abrams by 7.6 points in polling by FiveThirtyEight — which also showed on the day of the election that Kemp had a 94-in-100 chance of carrying the state.

Kemp assumed the governorship in January 2019, having previously served as Georgia’s Secretary of State for a decade. He also served as a member of the Georgia State Senate for four years.

Abrams announced her second bid for the governorship in December 2021, telling voters, “Opportunity and success in Georgia shouldn’t be determined by your zip code, background or access to power.”

She added, “For the past four years, when the hardest times hit us all, I’ve worked to do my part to help families make it through. My job has been to just put my head down and keep working — toward One Georgia.”

Kemp defeated former U.S. Sen. David Perdue in the 2022 primary election, despite having come under repeated criticism from former President Donald Trump, who attacked him for not overturning the result of the 2020 election, when Georgia was handed to President Joe Biden.

Georgia was one of 36 states that had governorships up for election in the 2022 midterms. 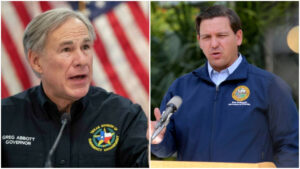