The state's primary takes place on May 24

A group of voters is asking the Georgia Supreme Court to reverse a lower court decision to prevent Congresswoman Marjorie Taylor Greene from appearing on the ballot.

The voters, represented by the election and campaign finance reform organization Free Speech for People, filed a lawsuit in March challenging the representative’s eligibility. The group claimed Greene had violated the Constitution’s Fourteenth Amendment, which prohibits anyone who has taken the oath of office and subsequently participated in insurrection from seeking reelection.

In the initial lawsuit, the group claimed Greene encouraged people to overthrow the government on Jan. 6, 2021 through statements she made online and to the media.

Georgia Administrative Law Judge Charles Beaudrot held a one-day hearing during which Greene testified she had never advocated for insurrection.

Ron Fein, an attorney representing the voters, asked Greene about the implied meaning of several of her posts on Twitter and attempted to argue that the term “1776” was a codeword for anti-government violence among Greene’s online followers.

Greene denied this allegation and said in the weeks leading up to the security breach at the Capitol she had worked with lawmakers to legally object to the certification of President Joe Biden’s electoral victory because of credible allegations of voter fraud.

Beaudrot found that Greene had not violated the Fourteenth Amendment and could appear on the ballot during the state’s May 24 primary. The judge said the plaintiffs had failed to produce sufficient evidence to support their claim.

His decision was sent to Secretary of State Brad Raffensperger on May 6, who accepted the judge’s decision which made Greene’s eligibility official.

Raffenberg wrote that it was “rightfully a question for the voters of Georgia’s 14th Congressional District” to decide if they wanted Greene to represent them for a second term given her political statements and actions.

The challenging group, five voters from Greene’s district, filed an appeal with the state’s Supreme Court on May 16. They argue that “Beaudrot erred by shifting that burden of proof to the challengers and thwarting the voters’ attempts to get evidence from Greene” and that “Raffensperger’s decision was thus ‘made upon unlawful procedures and affected by other errors of law,’” reports Fox 5 Atlanta.

The group wants the court to vacate the decision and return the case to Beaudrot for additional legal proceedings.

It is unclear if Greene will be permitted to appear on the primary ballot next week while ligation is pending or if she will be removed from the general election ballot if she wins the primary. 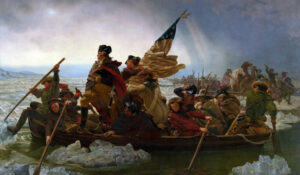 OPINION: George Washington, the Smallpox, and Everything the Corporate Press Got Wrong