Seven Of The Justices Agreed On The Decision, One Justice Was Disqualified, And One Did Not Participate

On Wednesday, the Georgia Supreme Court reinstated their abortion ban after the law was overturned last week by a Fulton County Superior Court.

A Fulton County Superior Court overturned HB481, dubbed the Georgia LIFE Act, last week, ruling it unconstitutional and immediately making the procedure legal up to 20 weeks. However, the Supreme Court of Georgia’s ruling reinstates the state’s law banning abortions after a “detectable human heartbeat” is present — typically around six weeks of gestation. The law was originally passed in 2019 but did not take effect until Roe v Wade was overturned this summer.

“The State of Georgia’s Emergency Petition for Supersedes seeking a stay of order of the Superior Court of Fulton County in the above-styled action is hereby granted,” read the statement. “To the extent the State also seeks an ‘administrative stay,’ that motion is dismissed as moot.”

Fulton County Superior Court Judge Robert McBurney originally claimed the law was invalid because the bill was passed prior to the overturning of Roe v Wade in 2019.

“The supreme law of this land unequivocally was – and had been for nearly half a century – that laws unduly restricting abortion before viability were unconstitutional,” wrote McBurney in his opinion, claiming the right to pre-viability abortion existed nationwide under Roe v Wade when the law was passed and signed by Governor Brian Kemp.

“[E]verywhere in America, including Georgia, it was unequivocally unconstitutional for governments — federal, state, or local — to ban abortions before viability,” McBurney wrote, adding that “if the courts have spoken, clearly and directly, as to what the law is, as to what is and is not constitutional, legislatures and legislators are not at liberty to pass laws contrary to such pronouncements.”

McBurney further warned that lawmakers could pass similar “trigger-law” legislation similar to the LIFE Act though would face the “sharp glare of public attention that will undoubtedly and properly attend such an important and consequential debate whether the rights of unborn children justify such a restriction on women’s right to bodily autonomy and privacy.”

The lawsuit seeking to overturn the LIFE Act was filed by SisterSong Women of Color Reproductive Justice Collective, which brands itself as a group that seeks to “strengthen and amplify the collective voices of indigenous women and women of color to achieve reproductive justice.”

“After a long road, we are finally able to celebrate the end of an extreme abortion ban in our state,” said executive director of SisterSong Monica Simpson in a statement. “While we applaud the end of a ban steeped in white supremacy, it should not have existed in the first place. Now, it’s time to move forward with a vision for Georgia that establishes full bodily autonomy and liberation for our communities.”

The state Attorney General’s office appealed the Fulton County overruling to the state Supreme Court, the Associated Press reported. Seven of the justices agreed on the decision, one justice was disqualified, and one did not participate, according to the order. 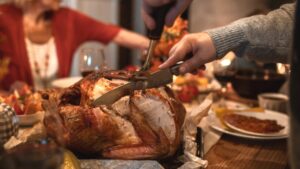 Average Thanksgiving Dinner Now Costs Over $250 Due To Inflation