Average Thanksgiving Dinner Now Costs Over $250 Due To Inflation

Holiday Food Costs Are Now the Highest Since 2002

This year, Thanksgiving will gobble up more money from people’s pockets as Americans are spending more on holiday food than in previous years, according to new survey data.

On average, Americans are planning to spend $251 on Thanksgiving dinner in 2022, a survey from Coupon Follow found.

Millennials expected the highest cost ($300), while baby boomers report the lowest ($140). Both Gens X and Z are budgeting roughly $200.

The priciest food item at Thanksgiving this year is likely to be turkey, which has seen the biggest price increase since 2002.

Record inflation has driven meat prices up an average of 12 percent, as turkey prices have increased 14 percent, Forbes reports.

Part of the higher cost of turkey is inflation, but also contributing to the price were thousands of birds infected with the Avian flu that had to be killed this year.

In Meeker County, Minnesota, farmers raising birds for Hormel — the second largest turkey supplier in the U.S. — had to put down 180,000 turkeys, Forbes says.

An October report from the U.S. Department of Agriculture (USDA) confirmed an Avian flu outbreak in Arkansas, a state the agency says accounts for eight percent of U.S. turkey production.

The USDA says that 1.79 million turkeys were lost to a second wave of Avian flu this year, primarily in Minnesota, California, and Utah.

Coupon Follow says that the cost for Thanksgiving dinner has risen 64 percent since 2002.

Facing 40-year-high inflation, the year-over-year cost for all food items has surged in 2022.

Data provided by the U.S. Bureau of Labor Statistics (BLS) shows the cost of “other uncooked poultry including turkey” up 16.9 percent higher than a year ago, dairy products up 15.5 percent, eggs up 43 percent, and butter and margarine up 33.6 percent.

With Americans stuffing less into their pockets, consumers said in a separate survey that they would be “looking for deals on Thanksgiving meal items before the holiday week, and make spot purchases of specific items as they see them go on sale or if they have a coupon,” according to Grocery Dive. 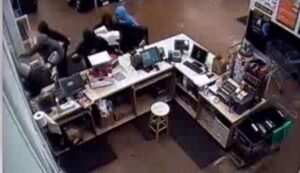