More voters casting ballots than in 2018 and 2020 elections

Despite concerns over alleged attempts at voter suppression, Georgia residents are already showing record-breaking turnout in this year’s midterm elections.

After one week of early voting, in-person voting is pacing ahead of the 2020 election, according to the Savannah Morning News.

“There are real contests going on, there’s a tremendous amount of advertising that’s taking place, and under those conditions, a voter will potentially feel like it’s really important that he or she goes and registers their own preferences, where as in a low visibility kind of contest, a lot of voters wouldn’t be aware it’s taking place,” said Charles Bullock, a University of Georgia political science professor.

Saturday’s turnout marked a 159 percent increase from day-six voting in 2018, and shattered the turnout record of day-six early voting in the 2020 presidential election by 20 percent, the Georgia Secretary of State’s office said.

“Nearly 50% of early voters were white, while Hispanic and Asian voters each made up about 1% of turnout,” according to The Atlanta Journal-Constitution (AJC). “Black voters accounted for about 39% of Georgia’s early voters, higher than their 29% share of the state’s registered voters, according to an analysis of election data by the AJC.”

Georgia has more than seven-and-a-half million registered voters, with roughly 6.9 million considered “active” by the Secretary of State’s office. 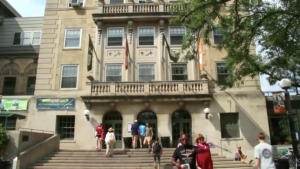 University Of Wisconsin-Madison Vandalized Ahead Of Matt Walsh's Appearance