On September 1, President Biden spoke outside of American Independence Hall in Philadelphia and asserted that the over 74 million Americans who voted for his opponent in 2020 “present a “clear and present danger to our democracy” and “threat to this country.”

“Donald Trump and the MAGA Republicans represent an extremism that threatens the very foundations of our republic,” the president said.

The president added that “there’s no question that the Republican Party today is dominated, driven and intimidated by Donald Trump and the MAGA Republicans. And that is a threat to this country. These are hard things.”

“We are all called by duty and conscience to confront extremists who put their own pursuit of power above all else. Democrats, independents, mainstream Republicans must be stronger, more determined and more committed to saving American democracy than MAGA Republicans are to destroying American democracy,” Biden said. “We the people will not let anyone or anything tear us apart.”

Biden spoke in front of a darkly lit building that glowed red.

Biden literally knocked off the dystopian dictator for V for Vendetta ans thinks he looks like the good guy 😂 pic.twitter.com/Eb0qJTR6Rs

Responding to the speech during an appearance on Fox News’ Hannity, Miller asserted that “President Trump poured out his heart, his soul, his spirit every day to build a better America for everyone in this country — a safer and more prosperous America. While Democrats and deep state launched an illegal operation to take him out that is now in its sixth year!”

“He’s the one who is interfering in the sacred relationship between parent and child to try to force dangerous medicine, puberty blockers, hormones, on our little kids,” Miller stated. “He’s the one whose government raided the home of his chief political opponent in a fashion that violates the entire constitutional order because President Trump has the absolute right to decide what is or isn’t in the national security interest when he leaves the White House.”

“All of those things, all of them, are the behavior of a tyrant,” Miller added. “This speech is the moment that Biden crossed the Rubicon and he ceased to be a man who could even pretend, could even claim, that he has the interests in this country at heart.” 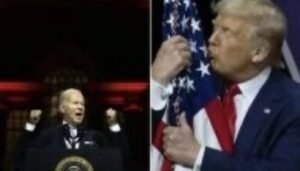 Trump Responds to Biden's Speech, Says That He 'Threatened America' and 'Must Be Insane'