The Senate confirmed the president's nomination for Belize, Panama, Kyrgyzstan, and Nicaragua

Kwan will serve as the next ambassador to Belize. She was nominated by President Joe Biden for the position in December.

The athlete-turned-Democratic-activist won a silver medal at the 1998 Winter Olympics and won a bronze medal at the 2002 Olympics. Kwan was the US figure skating champion in 1996 and between 1998-2005. She has a graduate degree in international relations from Tufts Fletcher School of Law and International Diplomacy.

In 2006, former Secretary of State Condoleeza Rice named Kwan a US public diplomacy ambassador, a position she held for a portion of President Barack Obama’s administration. She traveled on behalf of the State Department to “engage youth around the world on social and educational issues.” Kwan served as a senior adviser for public diplomacy and public affairs for the State Department in 2012 and on the Biden campaign in 2020.

Kwan was previously married to Claiborne “Clay” Pell IV, a former Deputy Assistant Secretary for International and Foreign Language Education in the United States Department of Education, who unsuccessfully ran for Governor of Rhode Island in 2014. The couple announced they were divorcing in 2017.

Kwan has one daughter, Kalista Belle Kwan, who was born in January 2022. She has not disclosed the identity of her child’s father.

“Michelle Kwan has had a distinguished career in public service, diplomacy and sports,” said the State Department in her Certification of Competency. “Kwan’s extensive work experience at the U.S. State Department in public diplomacy and youth outreach and her work with non-profit organizations combined with her strong management and business skills make her a well-qualified candidate to be the U.S. Ambassador to Belize.”

Kwan said she would be “very proud to serve” her country if confirmed.

“Belize is full of incredible history and culture, and has been a tremendous partner to the United States,” she said in a statement, per CNN. “I look forward to working with the Belizean government on economic issues, to put an end to this pandemic, and to address the root causes of migration.”

The Senate also confirmed three other ambassadors on Sept. 29.

Lesslie Viguerie will be the next ambassador to Kyrgyzstan. From Aug. 2020 to May 2022, he was the deputy assistant secretary for Central Asian and Pakistan affairs for the State Department’s Bureau of South and Central Asian Affairs. He previously served as the Deputy Chief of Mission at the US Embassy in Uzbekistan.

The former ambassador to El Salvador, Mari Carmen Aponte, was confirmed as the ambassador to Panama. She is currently the Acting Assistant Secretary in the Department of State’s Bureau of Western Hemisphere Affairs and was nominated by Biden in October.

In a voice vote, the Senate confirmed Hugo Rodriguez as the ambassador of Nicaragua.

Nicaragua withdrew its support for Rodriguez’s nomination in July after he criticized President Daniel Ortega, reports The Hill.

The State Department described Rodriguez as “a career member of the Senior Foreign Service with the rank of Minister-Counselor” and said that his “substantive regional experience, coupled with his management experience and demonstrated ability to lead large interagency teams as well as policy-oriented offices, makes him a well-qualified candidate to be the U.S. Ambassador to Nicaragua.” 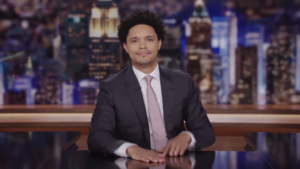 Trevor Noah Announces His Exit From 'The Daily Show'