Trevor Noah Announces His Exit From 'The Daily Show'

Trevor Noah announced he is leaving The Daily Show on Thursday after hosting the program since 2015.

“It has been seven years since we started The Daily Show With Trevor Noah,” the comedian noted toward the end of the broadcast whole thanking the audience and crew. Noah detailed his experience running the program through Donald Trump’s presidency and the COVID-19 pandemic.

“I realized that after the seven years my time is up,” Noah told the crowd who audibly gasped at his announcement. “I’ve loved hosting this show. It’s been one of my greatest challenges, it’s been one of my greatest joys. I’ve loved trying to figure out how to make people laugh even when the stories are particularly s—-y on the worst days … but after seven years I feel like it’s time.”

Noah mentioned he missed being “on the road” after spending two years locked down during the COVID-19 pandemic.

“When I got out there again I realized there is another part of my life I want to carry on exploring,” Noah continued. “I miss learning other languages, I miss going to other countries, putting on shows. I miss being everywhere, doing everything. I am really grateful to everyone … It’s a weird thing to say. I’ve never been good at goodbyes.”

The comedian jokingly assured the audience his absence would not take effect immediately: “If I owe you money, I’ll still pay you.”

“I am grateful to a network who believed in this random comedian who nobody knew … I want to say thank you to you, to you who watched this … I never dreamed that I would be here. I sort of felt like ‘Charlie and the Chocolate Factory.’ I came here for a tour of what the previous show was and then the next thing you know I was handed the keys.”

“We are grateful to Trevor for our amazing partnership over the past seven years,” said the network in a statement, according to Variety. “With no timetable for his departure, we’re working together on next steps. As we look ahead, we’re excited for the next chapter in the 25+ year history of ‘The Daily Show’ as it continues to redefine culture through sharp and hilarious social commentary, helping audiences make sense of the world around them.”

Noah hosted The Daily Show from his apartment during the COVID-19 pandemic and shifted the program’s format towards more serious discussions on social politics. Between June and September 2021, the show was on hiatus as production planned its return to standard studio broadcasts.

The comedian’s exit from late-night talk show format follows fellow late night hosts James Corden, who announced he will be leaving The Late Late Show in 2023 along with Samantha Bee’s departure from late night after her show Samantha Bee’s Full Frontal was cancelled this summer.

No successor to Noah has been announced as of Friday. 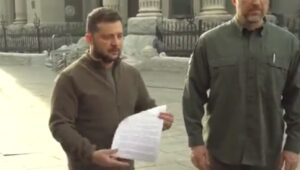