Former New York Times reporter and two-time Pulitzer Prize winner Nicholas Kristof has announced that he is running for Governor of Oregon.

Raised on a sheep and cherry farm in Yamhill, Kristof is an Oregon native. He is seeking to replace Kate Brown, who can not be reelected due to term limits.

When he announced on Oct. 14 that he would be leaving The New York Times, Kristof wrote, “You all know how much I love Oregon, and how much I’ve been seared by the suffering of old friends there. So I’ve reluctantly concluded that I should try not only to expose problems but also see if I can fix them directly.”

“Kristof won a Pulitzer prize in 1990 along with his wife, Sheryl WuDunn, for their reporting on the protests at Tiananmen Square in China. He won the award again in 2006 for columns about the Darfur conflict in Sudan,” per The Guardian.

The 62-year-old will run as a Democrat, maintaining a long-standing trend in the state. Oregon has had a Democrat governor since 1987. The party has also held the majority of seats in the state’s legislature since the 1980s.

In his campaign announcement video, Kristof said after years of covering global conflict, he was troubled to find his home state was in crisis.

“Nothing will change until we stop moving politicians up the career ladder year after year, even though they refuse to step up to the problems Oregon faces,” said Kristof.

He named drug addiction, homelessness, unaffordable housing, and an escalating homicide rate in Portland as problems that have gone unsolved by previous politicians.

Some outlets have reported Kristof may not be eligible to run for office. Oregon’s constitution requires gubernatorial candidates to have lived in the state for the three years prior to their run.

Kristof and his wife have worked and paid Oregon property taxes on a 150-acre property in Yamhill, Oregon since 1993. Despite this, Willamette Weekly reports that Kristof voted in the 2020 General Election in New York. He was also using a Westchester County, N.Y., for correspondence last year.

“Nicholas Kristof is an Oregonian. That is obvious. He grew up here, he is present here regularly, he owns and pays taxes on real property here. He has a bedroom here,” the memo states. “He manages a farm and an agricultural business here. He has hiked the entire length of Oregon along the Pacific Crest Trail, sent his children to OMSI camps, backpacked around Mount Hood, eaten at Mo’s in Lincoln City, and grieved the loss of family members and friends as part of a community here.”

The legal team says the writers of the state’s constitution wanted to protect against a “stranger” who was unfamiliar with Oregon’s problems and would try and become governor. They conclude that Kristof, therefore, is not a problem. 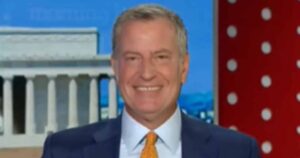