Cheslie Kyrst, who was 2019’s Miss USA, died at the age of 30 after reportedly jumping from her New York City apartment.

Kryst was announced dead at the scene after her body was found around 7 AM on Jan. 30 in front of the Orion building on West 42nd Street.

Police believe she jumped from the 60-story building in an apparent suicide.

According to The New York Post, Kryst lived on the ninth floor of the midtown building. She is said to have written a note leaving everything to her mother, who was Mrs. North Carolina in 2002.

“In devastation and great sorrow, we share the passing of our beloved Cheslie. Her great light was one that inspired others around the world with her beauty and strength,” her family said in a statement confirming her death.

Kryst’s victory at Miss USA in 2019 was hailed by many as a win for representation. Her crowning marked the first time the reigning Miss USA, Miss Teen USA and Miss America were all black women.

The Miss Universe pageant, for who Kryst provided commentary in December, said in a statement that she was “one of the brightest, warmest, and most kind people we have ever had the privilege of knowing. Our entire community mourns her loss.”

In addition to her work as an entertainment correspondent for “Extra,” Kryst was also a former North Carolina attorney who specialized in civil litigation. She provided pro bono work for the Buried Alive Project, an organization that seeks reduced sentences for people convicted of drug offenses.

Kryst was a student-athlete at the University of South Carolina. She also received an M.B.A and a law degree from Wake Forest University.

On several occasions, she had spoken publicly about her efforts to maintain her mental health. She told The Hilltop in 2020 that she had three core strategies for self-care.

“Two, I try to set very clear boundaries, so even though I’m at home and I’ve got my computer, my phone with me, I’m done answering emails at 6 o’clock, I’m not responding to messages,” she added. “It’s over.”

Finally, the former pageant participant said, “I have a regular workout schedule that keeps my body healthy and my mind sharp.”

Hours before her death, Kryst posted a photo of herself on Instagram with the caption, “May this day bring you rest and peace.”

Suicide in America had increased dramatically over the last decade among young people — surging by 57% between 2017 and 2018 among people ages 10-24. U.S. Surgeon General Dr. Vivek Murthy reported in 2021 that hospitalization following a suicide attempt was up by 4% among adolescent boys and 51% among adolescent girls. 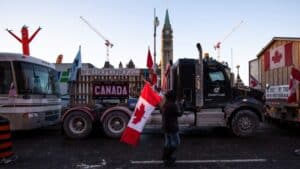