A Haitian politician has been charged in connection with the assassination of President Jovenel Moïse.

Nearly 10 months after Moïse’s death, a former senator appeared for the first time in Miami federal court on conspiracy to commit murder charges after being extradited to the United States on May 6.

Joseph Joel John, a former senator, was arrested in January in Jamaica. In addition to the conspiracy charges, John has been charged with providing material support resulting in death and knowingly or intentionally supplying material support to be used to kill or kidnap.

According to a statement from the United States Department of Justice, the former senator took part in a conspiracy to kill the president with at least 20 other men — including “approximately 20 Colombian citizens and a number of dual Haitian-American citizens.”

John was allegedly present when one of the conspirators “secured the signature of a former Haitian judge on a written request for assistance to further the arrest and imprisonment of President Moïse, as well as purporting to provide Haitian immunity for such actions.”

“John helped to obtain vehicles and attempted to obtain firearms to support the operation against the president,” the DOJ said. “It is also alleged that John attended a meeting with certain co-conspirators on or about July 6, 2021, after which many of the co-conspirators embarked on the mission to kill President Moïse.”

John is currently in American custody. If convicted, the politician could be sentenced to serve life in prison.

Moïse was killed in his home in the hills near Port-au-Prince on July 7 after a group of unidentified men gained access to the property.

A former banana exporter, Moïse had been elected in 2017. His wife was injured during the attack and taken to Florida for treatment.

In the days after the incident, dozens of Columbian men were arrested in connection to the president’s death. They were taken into custody following a firefight with Haitian police that resulted in at least four fatalities.

Political chaos followed as several leaders claimed to be in charge of the national government.

The then-interim Prime Minister Claude Joseph declared a state of emergency following the president’s death and declared himself the acting head of government. At the time, Joseph was slated to be replaced by neurosurgeon Ariel Henry who had been selected by Moïse.

Claude ultimately ceded power to Henry in August of 2021.

“Everyone who knows me knows that I am not interested in this battle, or in any kind of power grab,” Joseph told The Washington Post at the time. “The president was a friend to me. I am just interested in seeing justice for him.” 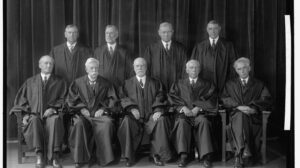