FDR and the great Court Packing Fail — where did it come from and why does it suck?

Courtesy of the Harris & Ewing collection at the Library of Congress

Since the leak of the Roe and Casey opinion earlier, we saw influential democrats like Adam Schiff call for “court packing.” It’s not the first time we’ve seen this reactionary measure brought up when things happen that the Democrats don’t like. We saw it during the Kavanaugh hearing and we saw it again after the passing of Ruth Bader Ginsberg. We see it each time they have legislation fail from Infrastructure to gun control. But what is court packing and where did it come from?

I’m sure you’ll be shocked to learn that the idea of a President adding more justices to the Supreme Court when he doesn’t get his way was first brought forth by FDR after the Court found his New Deal to be an overreach of power.

FDR continued pushing for it anyway. His power lust got him compared to Hitler on a National stage. But let’s dive in.

In the days following “Black Monday,” President Roosevelt began private talks with his advisers and attorney general, Homer Cummings, about how to curb the power of the Supreme Court. They landed on drafting a bill — ironically, a duty that is a legislative power, not an executive one — proposing Congress pass a law granting the president the power to “nominate an additional judge for every federal judge who, having served a minimum of 10 years, did not resign or retire within six months after reaching age 70,” according to an analysis by the Constitutional Rights Foundation. 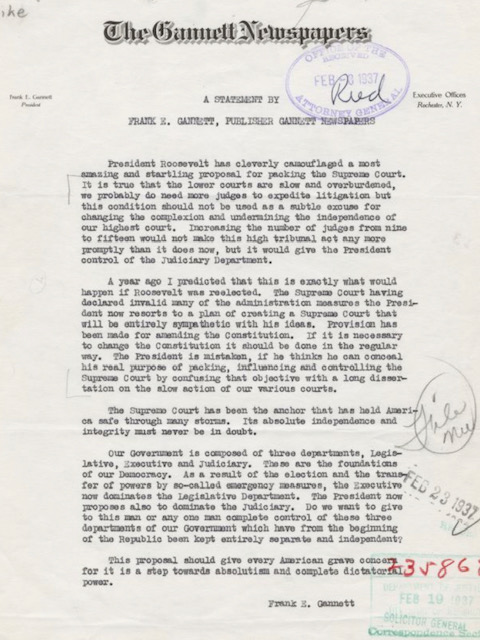 Essentially, this would empower FDR to add up to six more justices to the Supreme Court as well as nearly 50 additional judges to the lower courts — with senate approval, naturally, because he’s not a tyrant or anything.

So FDR sent his court-reform bill over to Congress, along with a message via one of his famous fireside chats stating that “the judiciary should be reorganized in order that it also may function in accord with modern necessities.” The proposal made its way to the Democrat-heavy Senate Judiciary committee where many of those testifying saw it for what it was: an attempt to pack the Supreme Court with liberal justices, thereby making it political, undermining its independence, and violating the separation of powers. They made it abundantly clear that it was not the Supreme Court justices who didn’t like Roosevelt’s New Deal laws — it was the Constitution itself that thought they were trash.

Good Golly Miss Molly, this all sounds so familiar.

Biden refused to rule out packing the court if we proceed to fulfill our constitutional duties by filling the current #SCOTUS vacancy.

Where would such a path lead us? 13 justices, then 21 justices–at what point does it stop?

That is dangerous territory. pic.twitter.com/hrZwXwTsAu

Democrats’ effort to pack the court is a dangerous partisan power grab.

I introduced a resolution on behalf of Ohioans to say NO to the Democrats’ court packing agenda!https://t.co/RKXl3jK8d6

Even the Senate Judiciary Committee, which, as I said earlier, was dominated by Democrats, remains objective, and recommended against the president’s proposal, stating in their report: “This bill is an invasion of judicial power, such as has never before been attempted in this Country.”

The proposal ultimately failed, but the New Deal went on to happen still, as Congress voted in favor of it and SCOTUS let that fly anyway.

Packing the Court has always been a corrupt scheme, born of deviant, self-serving, and exploitative intentions, in which one branch of the federal government tries to bastardize another. The implementation of this action would erode our country straight through to the foundation of our Constitution. It is irrefutably and categorically un-American and subversive — just like Adam Schiff.

I don’t care how the draft leaked. That’s a sideshow.

What I care about is that a small number of conservative justices, who lied about their plans to the Senate, intend to deprive millions of women of reproductive care.

Codifying Roe isn’t enough. We must expand the court.