The Foo Fighters have cancelled all of their upcoming tour dates following the death of their drummer Taylor Hawkins.

The band’s next performance was supposed to be the Grammy Awards on April 3.

“It is with great sadness that Foo Fighters confirm the cancellation of all upcoming tour dates in light of the staggering loss of our brother Taylor Hawkins, the band said in a statement provided to CNN. “We’re sorry for and share in the disappointment that we won’t be seeing one another as planned. Instead, let’s take this time to grieve, to heal, to pull our loved ones close, and to appreciate all the music and memories we’ve made together. With Love, Foo Fighters.”

According to a report from the Daily Mail, Hawkins’ heart weighed double that of an average man his age and size at the time of his passing.

Investigators found that he suffered a “cardiovascular collapse” after taking a large selection of drugs including heroin, marijuana, and opioids.

“Forensic experts are said to have discovered it weighed ‘at least 600 grams’, double the average of 300 to 350 grams, during an examination following his shock death at a luxury hotel in Colombian capital Bogota on Friday,” the report stated. “It also said authorities had confirmed the Foo Fighters drummer had overdosed on heroin mixed with antidepressants and benzodiazepines which are psychoactive drugs known as benzos.”

The AGO’s statement read as follows:

“After concluding an initial forensic examination of the body the AGO would like to communicate the following:

In 2001, Hawkins was left in a coma for roughly a week after a heroin overdose in London.

Speaking to  Kerrang! last year, Hawkins said, “I was partying in London one night, and I mistakenly did something and it changed everything. I believed the bull***t myth of live hard and fast, die young.”

“I’m not here to preach about not doing drugs, because I loved doing drugs, but I just got out of control for a while and it almost got me. I was heading down a road that was going to lead to even worse paths. Whether someone’s sober, or they like a glass of wine with dinner, or they want a bottle of Jägermeister before they go on stage, or they like to smoke doobies all day long, everyone has their own path, and I took it too far,” Hawkins continued.

The drummer added, “I’m glad it got knocked on the head at that point. I wouldn’t take anything away that I’ve done or been through either, because it’s all part of the trip and the journey. I’m trying to be as candid as I can be.”

Hawkins leaves behind a wife and three children. 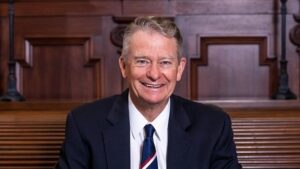