A West Virginia house belonging to Timcast owner Tim Pool was burglarized on Monday morning around 7 a.m., resulting in shots being fired at the perpetrators.

Pool has been the target of intense smear campaigns, public doxing, and death threats which have escalated significantly in recent weeks — much of it stemming from his political opinions.

theres a 9mm bullet lodged in my kitchen now

An employee of Timcast, who wishes to remain anonymous, was present when two men broke the kitchen window at the house and climbed inside.

The employee went to the kitchen to confront the burglars and let it be known that he was armed. He said that as he was walking through the hallway, he could hear the intruders talking, but they were not coming toward him.

“I was going out into the kitchen to confront them, and I announced myself before I turned the corner,” he said.

When they did not retreat or explain themselves, he shot at them. Neither of the men got hit, but a bullet was left lodged in the kitchen island.

The duo jumped out of the window and sped off in their vehicle. In their panic, one of the perpetrators dropped a wallet with identification inside, but the employee believes that it may have been stolen and did not appear to belong to either of the people who were in the building.

It is not clear if anything was stolen, but the employee does not believe that they had time to get anything.

The popular podcaster has also been the target of multiple swattings this year at his Maryland studio. Swatting is the act of calling in a fake police report, usually about a violent crime, to a person’s home or business — prompting a heavy police response.

Swatting has had deadly consequences in the past.

In 2017, Andrew Finch in Wichita, Kansas, was targeted by serial swatter Tyler Barriss, who had claimed that he had shot his father to death and was holding the rest of his family hostage at the home.

Finch, who was unarmed, was fatally shot by police who believed that he was reaching for a weapon.

Barriss was sentenced to 20 years in prison in 2019 under a plea agreement. He had been charged with 51 offenses, including making a false report resulting in death.

Pool tweeted about Monday’s incident saying he “just got word that a crew broke into one of our properties.”

“They are lucky to be alive,” Pool continued. “After nearly being struck by a 9mm they panicked and dropped their belongings and fled the property.Please stay the fuck away from my buildings. This is WV and you will get hurt.”

could you image breaking into a house and theres some right wing nut job with a Barrett M81A pointed at you yelling yeehaw?

Pool continued to note that “you have to be insane to break into a WV house.” He said, “not only do we have guns we have like really big ones.”

The police were called, and a report was filed.

Nobody was injured during the incident, and there are currently no suspects in custody.

Pool discussed the incident on his channel on Monday afternoon. 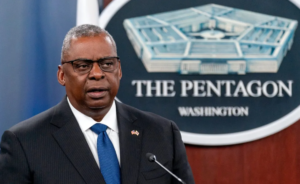