The Evangelical Lutheran Church in America installed an openly transgender bishop on Saturday in San Francisco.

Reverend Megan Rohrer was made a bishop at service at Grace Cathedral on Saturday.

In May, Rohrer was elected to a six-year term after the region’s bishop announced his retirement.

“I step into this role because a diverse community of Lutherans in Northern California and Nevada prayerfully and thoughtfully voted to do a historic thing,” Rohrer said in a statement. “My installation will celebrate all that is possible when we trust God to shepherd us forward.”

Outside the cathedral, Rohrer added, “So many of the places where trans people experience violence these days are in the places where there are a lot of people who believe their faith compels them to divide and to distance.”

In a statement on its website, Grace Cathedral said, “As the first openly trans person elected bishop of a major Christian denomination, Bishop Megan’s installation is truly an historic occasion. Grace Cathedral’s involvement arises from size of the event and the full communion relationship of the Lutheran and Episcopal Churches in the United States. The Right Rev. Dr. Marc Handley Andrus, Bishop of the Episcopal Diocese of California, will serve as one of three consecrating bishops in the installation rite.”

More than 65 bishops and more than 150 pastors gathered at the cathedral for the installation.

“Local dignitaries filled the pews for Saturday’s service. They included the Rev. Elizabeth Eaton, presiding bishop of the Evangelical Lutheran Church in America, the city’s police and fire chiefs, Supervisors Rafael Mandelman, Matt Haney and Myrna Melgar, state Sen. Scott Wiener and California Lt. Gov. Eleni Kounalakis. Others in the city, including the head of the Department of Emergency Management, took to social media to laud Rohrer,” reports USA Today.

Rohrer uses the pronouns ‘they/them’ and was one of seven LGBTQ pastors acknowledged by the Evangelical Lutheran in 2010 following the church’s decision to recognize pastors in same-sex relationships.

Rohrer was pastor of Grace Lutheran Church as well as a chaplain coordinator for San Francisco’s police department. Previously from Sioux Falls, South Dakota, the new bishop moved to California to study at the Pacific School of Religion in Berkeley and is described as a “winning filmmaker, musician and historian” on Rohrer’s website.

Evangelical Lutheran Church in America is a progressive church with over 3.3 million members nationwide. 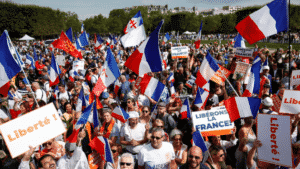