First Lady Jill Biden has apologized after comparing the Latino community to breakfast tacos during a speech.

The First Lady made the comment during the 2022 UnidosUS Annual Conference in San Antonio on July 11.

Biden was praising UnidosUS President Raul Yzaguirre when she said that he had “helped build this organization with the understanding that the diversity of this community, as distinct as the bodegas of the Bronx, as beautiful as the blossoms of Miami and as unique as the breakfast tacos here in San Antonio, is your strength.”

WATCH: First Lady Jill Biden says the diversity of the ‘Latinx’ community is “as unique as the breakfast tacos in San Antonio.”pic.twitter.com/NGfYnKWzHT

The message had quickly went viral on social media, where it was met with scorn and mockery from both sides of the political aisle.

The National Association of Hispanic Journalists issued a statement condemning Biden’s comment, asserting, “we are not tacos” and telling the First Lady to “not reduce us to stereotypes.”

NAHJ encourages @FLOTUS & her communications team to take time to better understand the complexities of our people & communities.

We are not tacos.

Our heritage as Latinos is shaped by various diasporas, cultures & food traditions.

Do not reduce us to stereotypes. pic.twitter.com/KQIq5gwsht

“NAHJ encourages Dr. Biden and her speech writing team to take the time in the future to better understand the complexities of our people and communities,” the organization wrote.

Jill Biden says Hispanics are as “unique” as tacos and calls bodegas “bogidas.”

No wonder Hispanics are fleeing the Democratic Party! pic.twitter.com/rhBB1pSNvZ

“The First Lady apologizes that her words conveyed anything but pure admiration and love for the Latino community,” LaRosa wrote.

The First Lady apologizes that her words conveyed anything but pure admiration and love for the Latino community.

The tweet was swiftly mocked by conservatives who pointed out that he forgot to write “Latinx.” 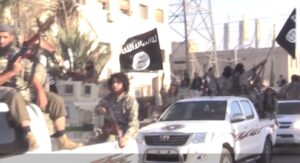 Top ISIS Leader Killed By US Airstrike in Syria