First Human Case of Bird Flu Strain Detected in US

The first confirmed case of the H5N1 bird flu virus in a human has been detected in the United States.

A Colorado man, who is described as being under 40, tested positive for the virus this week, according to the Centers for Disease Control and Prevention (CDC).

In their alert about the case, the CDC said, “This case occurred in a person who had direct exposure to poultry and was involved in the culling (depopulating) of poultry with presumptive H5N1 bird flu. The patient reported fatigue for a few days as their only symptom and has since recovered.”

“The patient is being isolated and treated with the influenza antiviral drug oseltamivir. While it is possible the detection of H5 bird flu in this specimen is a result of surface contamination of the nasal membrane, that can’t be determined at this point and the positive test result meets the criteria for an H5 case. The appropriate public health response at this time is to assume this is an infection and take actions to contain and treat,” the alert continued.

Despite the case being detected in a human, the CDC said that the threat level of H5N1 remains “low,” but that “people who have job-related or recreational exposures to infected birds are at higher risk of infection should take appropriate precautions outlined in CDC guidance.”

H5N1 viruses have been detected in commercial and backyard birds in 29 states and wild birds in 34 states, as of late April.

The Colorado case is the first in the US, but second globally.

The first case internationally was detected in December 2021 in the United Kingdom. The person raised birds that became infected, but did not have any symptoms themselves.

Millions of poultry birds have been killed across the US in hopes of stopping the spread of the highly contagious virus.

Over five million chickens were slaughtered at an egg factory in Iowa in March.

“The culling has been repeated at chicken and turkey farms across Iowa and 28 other states from Maine to Utah. More than 22m birds have been killed in an attempt to contain the outbreak – the majority in Iowa, the US’s biggest producer of eggs. The slaughter of 5.3m hens at Rembrandt is the largest culling at any factory farm in the country,” The Guardian reports. 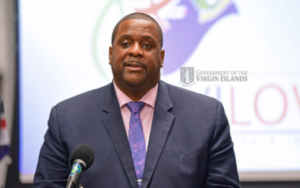