Missouri will become the first state to execute a person who self-identifies as transgender during the first week of 2023.

On Nov. 30, 2003, the suspect – then known as Scott McLaughlin – violated a protective order issued to Guenther and arrived at the victim’s place of work. When she exited the office, McLaughlin forced her to the ground, raped her and stabbed her multiple times. McLaughlin disposed of Guenther’s body in a wooded area on the bank of the river in St. Louis, per KHQA.

Prior to the attack, Guethener had filed written domestic violence statements with the Lincoln County police against her former boyfriend. Guethener stated McLaughlin harassed her in person and through phone calls.

A hearing on the domestic violence allegation was scheduled for Nov. 21, 2003, the day after Guenther was reported missing by her boss.

McLaughlin confessed in audio and video recorded statements to murdering Guenther and eventually led police to her body. The now 49-year-old has never confessed to raping Guenther.

McLaughlin had an established criminal history before the murder. McLaughlin was previously convicted for the 1992 rape of a 14-year-old girl and served time until being released in May 1997.

In 2016, US District Judge Catherine Perry of St. Louis cited concerns about the effectiveness of McLaughlin’s trial lawyer as well as instructions given to the jury and ordered a new sentencing hearing. Ultimately, a federal appeals court reinstated the death penalty in 2021.

McLaughlin began identifying as female while in prison. McLaughlin sued the Missouri Department of Corrections in 2016 over a policy prohibiting hormone therapy for inmates who were not being given hormones prior to being imprisoned. A judge ruled in McLaughlin’s favor in 2018.

Larry Komp, a federal public defender representing McLaughlin, told NBC News there are no pending court appeals. In a 27-page clemency appeal sent to Parson, McLaughlin’s lawyers cited their client’s mental health issues, a reportedly traumatic childhood which was not discussed at trial and remorse for killing Guethener.

“It’s wrong when anyone’s executed regardless, but I hope that this is a first that doesn’t occur,” Komp said, per The Daily Mail. “Amber has shown great courage in embracing who she is as a transgender woman, in spite of the potential for people reacting with hate, so I admire her display of courage.”

Komp has also said McLaughlin’s transgenderism is “not the main focus” of their clemency request.

While speaking with the St. Louis Post-Dispatch during a phone interview on Dec. 12, McLaughlin said the execution was a “sad thing.”

“I don’t agree with it,” McLaughlin told the paper. “People should know I’m mentally ill.”

“As ordained ministers, we believe in accountability but also the sanctity of life and do not think these tenets are mutually exclusive,” they said in a statement. “We must therefore make investments in the social and economic well-being of all people.”

The Democrats said that, in addition to the trauma suffered after being abused by foster parents, McLaughlin “was also silently struggling with her identity, grappling with what we now understand is gender dysphoria.”

“McLaughlin’s cruel execution would mark the state’s first use of the death penalty on a woman since the U.S. Supreme Court reinstated capital punishment in 1976,” Bush and Cleaver added. “And even worse it would not solve any of the systemic problems facing Missourians and people all across America, including anti-LGBTQ+ hate and violence, and cycles of violence that target and harm women.”

Missouri’s governor has denied clemency requests from all five men executed in the state since taking office in June of 2018.

“The governor then considers the matter and makes a decision when he is prepared to do so,” said Kelli Jones, a spokeswoman for Parsons, in a December statement. “These are not decisions that the governor takes lightly.” 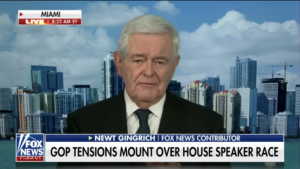 'They Don't Have The Moral Right': Gingrich Responds To Never-McCarthy Republicans