'They Don't Have The Moral Right': Gingrich Responds To Never-McCarthy Republicans

“I don’t understand what they’re doing. They’re not voting against Kevin McCarthy, they’re voting against over 215 members of their own conference,” said Gingrich. “Their conference voted overwhelmingly, 85%, for McCarthy to be speaker, so this is a fight between a handful of people and the entire rest of the conference.”

“They’re saying they have the right to screw up everything,” he continued. “Well, the precedent that sets is … any five people can get up and say, ‘Well, I’m now going to screw up the conference, too. The choice is Kevin McCarthy or chaos.”

“There’s nobody going to replace Kevin because he has far more people totally dedicated to him than this handful of never-enders, and the results [are] gonna be anybody who tried to replace Kevin would face total chaos. It’d be impossible to govern,” Gingrich continued. “So I hope in the next 24 hours this handful of members will realize they don’t have the moral right to reject the choice of 85% of their conference.”

They don’t have the moral right to break up the house against the wishes of over 215 fellow Republicans. And I think it’s a remarkedly shortsighted and candidly selfish position, and I don’t understand where they’re coming from. McCarthy has agreed to every policy they’ve asked for. The truth is that the Freedom Caucus has won a huge set of victories. … If you’ve got somebody and he gave you everything you’ve asked for and he still says ‘no,’ is the problem him and not McCarthy? That’s where these guys are gonna end up. … I think the Republican party is in the greatest danger of meltdown that it’s been since 1964.

“Every single Republican in Congress knows that Kevin does not actually believe anything. He has no ideology,” wrote Gaetz in a late December op-ed for the Daily Caller. “Some conservatives are using this fact to convince themselves that he is the right leader for the moment, as McCarthy is so weak he’ll promise anything to anyone.”

“McCarthy knows he will end up failing Republicans and caving to liberals. That’s why he opposes reinstating the motion to vacate, which was in place from 1801 to 2018. He wants to make sure conservative congressmen can’t fix the problem once it’s too late.” 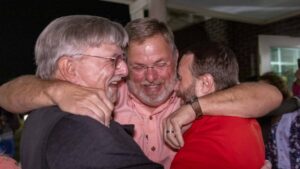